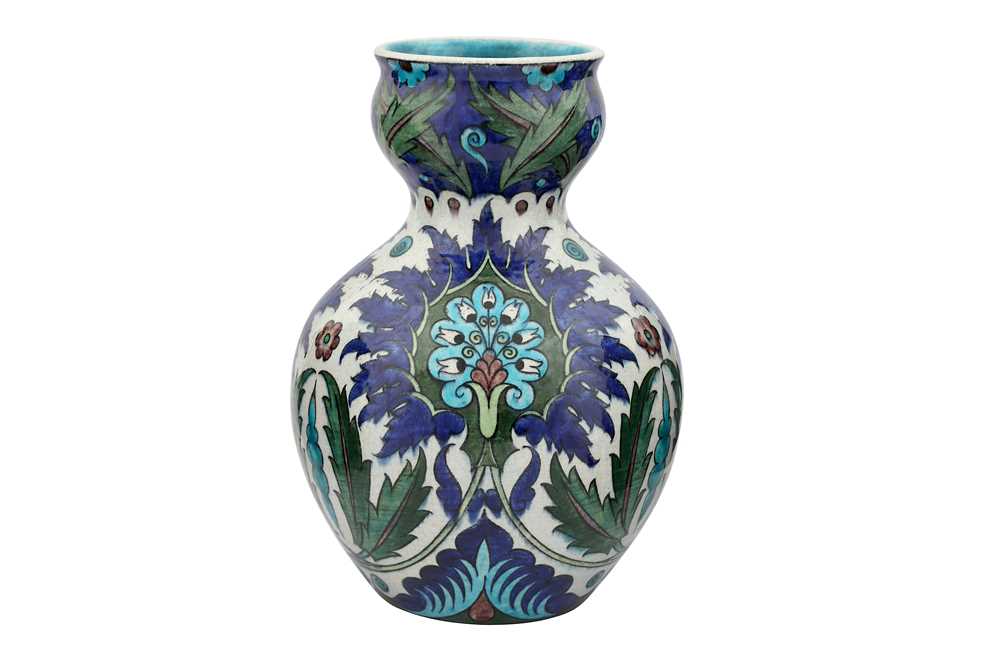 Of pyriform shape, resting on a flat base, rising to narrow shoulders and a bulbous neck with gently flared rim, painted in copper green, manganese purple, turquoise and cobalt blue with black outlines all on a white ground, the decoration typical of de Morgan's 'Persian' style featuring stylised arabesque palmettes and fully-blossomed lotus flowers filled with bouquets of tulips in the centre, around the neck and base crossed saz leaves, the interior of the vase with solid turquoise glaze, the base stamped with the Sands End kiln logo, the words W DE MORGAN / SANDS END POTTERY encircling a pair of angel wings, signed in black ink 'F.P.14.', 25cm high.

William De Morgan (1839 - 1917) was together with his friend William Morris one of the key designers of the 19th-century British Arts and Crafts movement. De Morgan started his career as a designer of stained glass for Morris's firm in the early 1860s, but he soon decided to establish his own brand 'W De Morgan & Co.', which he did in 1869. Although he would become known for his ceramic designs, it was in this seminal experience of working with glass that he started noticing similarities between metallic silver oxide deposits left on the surface of glassware after firing and Persian copper lustre-painted pottery. This discovery was the pivotal inspiration behind his most famous ceramic series in the 1890s, the 'Moonlight lustre' (for further information, please visit De Morgan Foundation https://www.demorgan.org.uk/discover/the-de-morgans/william-de-morgan/, last accessed 27/09/2021). As well as Morris, De Morgan was well-acquainted with other important artists of the time such as John Ruskin and AWN Pugin. Among his connections in the pottery world, the most remarkable was Ulisse Cantagalli, whom he met during one of his foreign travels to the Middle East and with whom he collaborated on an Iznik-style pottery series during his stays in Florance, Italy.

The stamp on the underside of this vase dates it to a later era of the William De Morgan & Co. production, the one located in the Sands End kiln, the final studio in which De Morgan worked. Based in Fulham, West London, the studio was operational between 1888 and 1904. The initials F.P., as seen on the base, are those of the decorator Fred Passenger, who eventually took over the company with his brother Charles in 1904, after De Morgan's passing. In his time, De Morgan was regarded as the world's leading authority on lustre pottery techniques thanks to his detailed calculations and experimental verve. As well as lustre, this British designer was also greatly inspired by Iznik wares, which influenced so many of his creations, as our vase testifies.