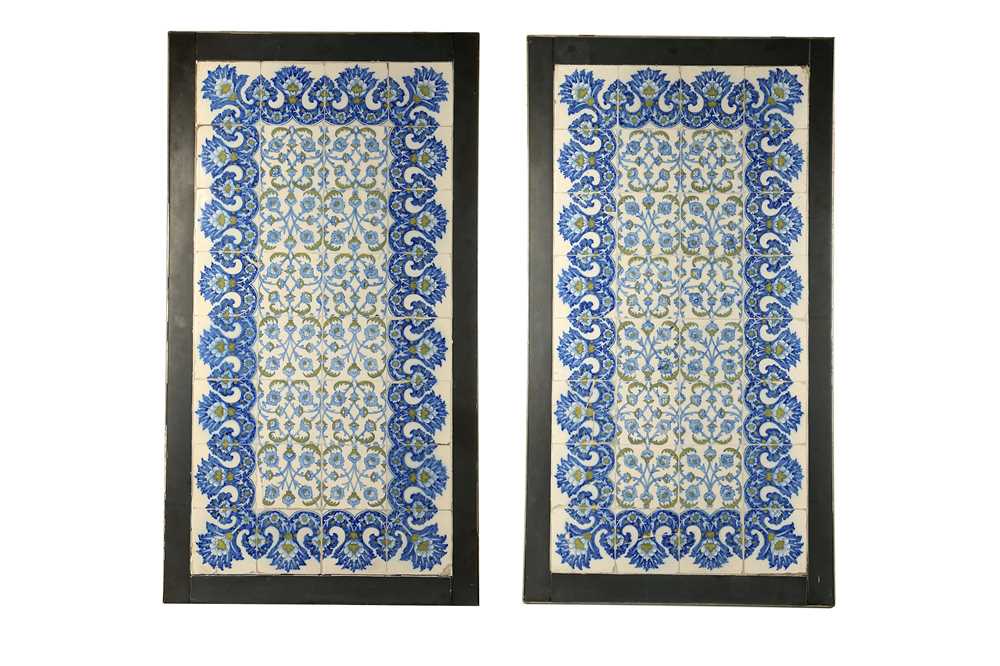 Comprising two large fireplace panels, each with twelve square tiles decorated with the Morris & Co. Persian diaper design in the centre, framed within further twenty similar tiles with a register of repeating palmettes filled with stylised lotus flowers, a recurrent motif on both Ottoman Iznik and Damascus pottery tiles as evident in the walls of the Rustem Pasha Mosque in Istanbul and The Arab Hall at Leighton House in London, all painted in cobalt blue and green on a white Dutch tin-glazed ground, mounted and framed, each tile approximately 12.7cm x 12.7cm, 114cm x 62cm x 2.5cm including the frame.

As well as the Middle Ages, William Morris (1834 - 1896) was greatly inspired by the arts of Persia and the Middle East. In 1882, he would go as far as stating that Persia was the pattern designer's 'Holy Land'. In 1871, Morris left London to move with his family to Kelmscott Manor, an inspirational rural retreat in the Cotswolds, where he spent the last years of his life. The mansion can be considered the artistic testament of this renowned British designer, who enhanced every corner of it with his elegant and unusual patterns. As an example, next to the fireplace of his White Panelled Drawing Room there are rectangular tile panels repeating the same Persian diaper design as in our lot, proving the incredible popularity of this Iznik-inspired motif in 19th-century England.