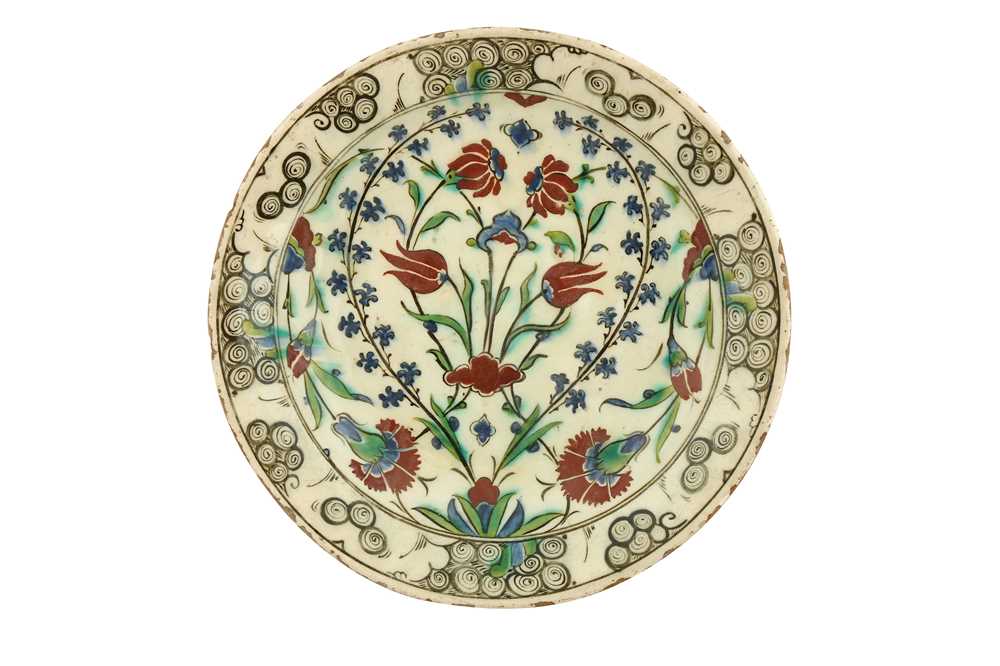 Of shallow rounded shape, resting on a short circular foot, rising to a gently everted flattened rim, painted in bole red in relief, cobalt blue and copper green in black outlines against a milky white ground, the interior decorated with a central floral composition mirrored around the central axis and following the Four Flower (Quatre Fleurs) aesthetic featuring red tulips (lale), red carnations (karanfil), sprays of light blue hyacinths (sümbül), and red plum blossoms (karayemiş) all stemming from a tuft of green and blue grass, the rim decorated with a stylised wave and rock design, the exterior with green and blue roundels against a plain white ground, 30.5cm diam.

Gardens and flowers played a very important role in the development of the 16th-century Iznik pottery aesthetic and artistic vocabulary. Throughout the Islamic world, gardens were considered mirrors of the Ultimate Garden, Allah's Paradise, and scholars, poets and princes would immerse in them to study, contemplate and savour the marvels of the Creator.

This passion for flowers and natural motifs pervaded all the decorative arts of the Ottoman Empire, not only the ceramic production. In the second half of the 16th century, a new design was successfully introduced into the repertoire of Iznik pottery, the quatre fleurs style. Soon to become very sought-after, this style used a charming combination of stylised tulips, carnations, roses and hyacinths. It was promoted by Kara Memi (Kara Mehmed Çelebi), the chief artist of Sultan Süleyman's courtly workshop (Gülru Necipoglu, The Age of Sinan: Architectural Culture in the Ottoman Empire, 2005, pp. 221 - 222). In our plate, one can admire the meticulous and symmetric precision of the Quatre Fleurs composition: though inspired by nature, the way the flowers are arranged on the plate is far from casual and spontaneous, disclosing how much planning and careful designing would have gone into each Iznik pottery vessel.