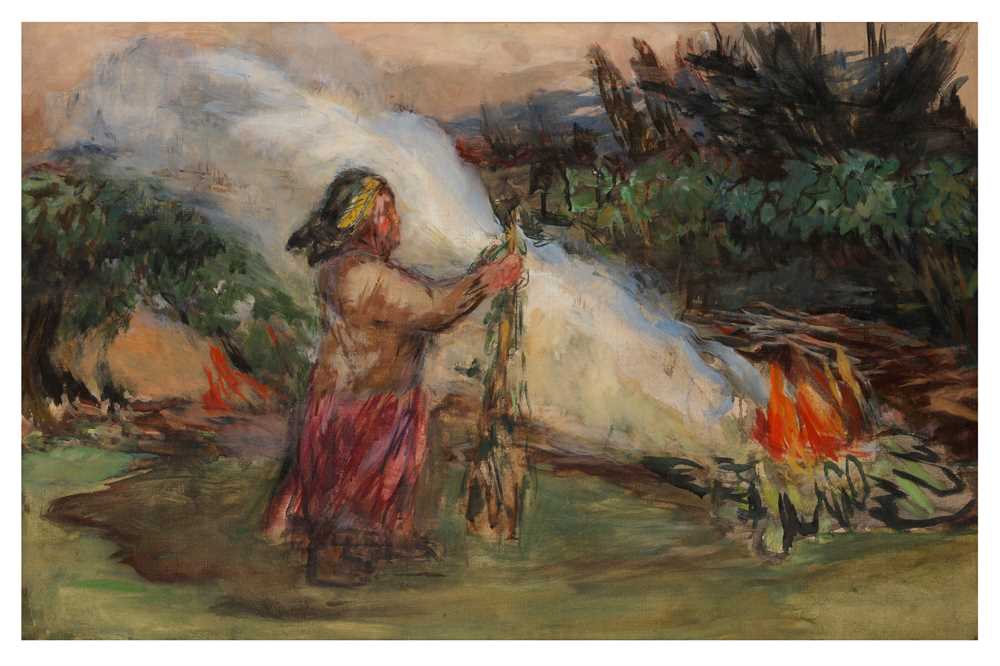 The present work shows Marie Hauptmann, a shoemaker's daughter from Bohemia tending a bonfire in the garden of Cornerways, the property the Motesiczky's acquired on Chestnut Lane in Amersham in 1941.

Marie had originally been taken on by the von Motesiczkys as wet nurse to Marie-Louise in Vienna, after she had been in service with another family, and become pregnant by the son of the house. Marie subsequently became indispensable as Marie-Louise's 'second-mother' and a vital support to her actual mother Henriette. Although Marie spoke not a word of English she followed Henriette and Marie-Louise to England in 1939 (fig. 1), living wth them until she died in 1954 a the age of sixty-nine.

Despite Marie being well into her 50s when the present work was painted, Motesiczky titled the composition Girl by the fire. By way of explanation, Schlenker notes: 'Marie Hauptmann's features are not defined clearly enough to be recognizable, but the solid figure, the working clothes and especially the brightly coloured headscarf, which the artist had enjoyed buying for her, identify her beyond doubt.' (p. 150).

Describing the individuality of the composition Schlenker observes: 'The painting has a rough, sketchy, almost primitive and unfinished air which prompted one critic to compare Marie Hauptmann to 'a Native American squaw'' (ibid), and notes that Elias Canetti, who saw Marie as an integral part of the painter's life, recognised Marie's totemic presence in this painting.