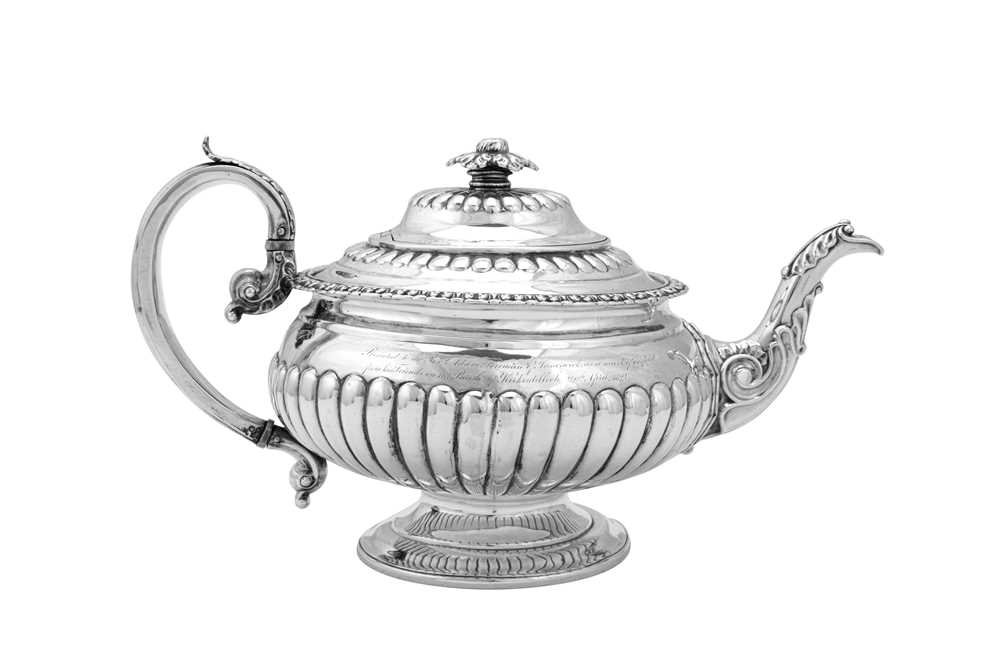 Of rounded form upon a spreading circular foot, the body with embossed half-fluted decoration. The shell capped curved spout opposite an acanthus capped reeded handle fitted with ivory insulators pinned to scroll sockets. The upper section with an acanthus rim and fluting, the hinged half-fluted domed lid surmounted by a detachable cast finial formed as a stylised organic form. The side engraved with a contemporaneous inscription reading “Presented to the Reverend Adam Foreman of Innerwick as a mark of respect from the friends in the parish of Kirkintilloch, 29th April 1824”. Fully marked underneath, the lid and finial unmarked.

Rev Adam Foreman or Forman (1760-1843), licensed by the Presbyterian of Glasgow 25th March 1789, ordained to Carmunnock on the 26th January 1792 and was ordained minister at the Auld Kirk on the 6th June 1811. Minister at the Parish Church of Kirkintilloch on the High Street and lived at the Manse on Cowgate. He married on the 8th August 1792, Margaret Brodie (1761-1842), daughter of Robert Brodie of Edinburgh.

Their son Adam Forman (1794-1865) was born at Carmunnock and studied at the Universities of Glasgow and Edinburgh. Ordained at Innerwick, Haddingtonshire in 1824. Married on the 17th August 1828 Margaret Coates Hamilton, daughter of the Rev. Dr Hamilton; and in 1838. Jane Turnbull. He had other issue.