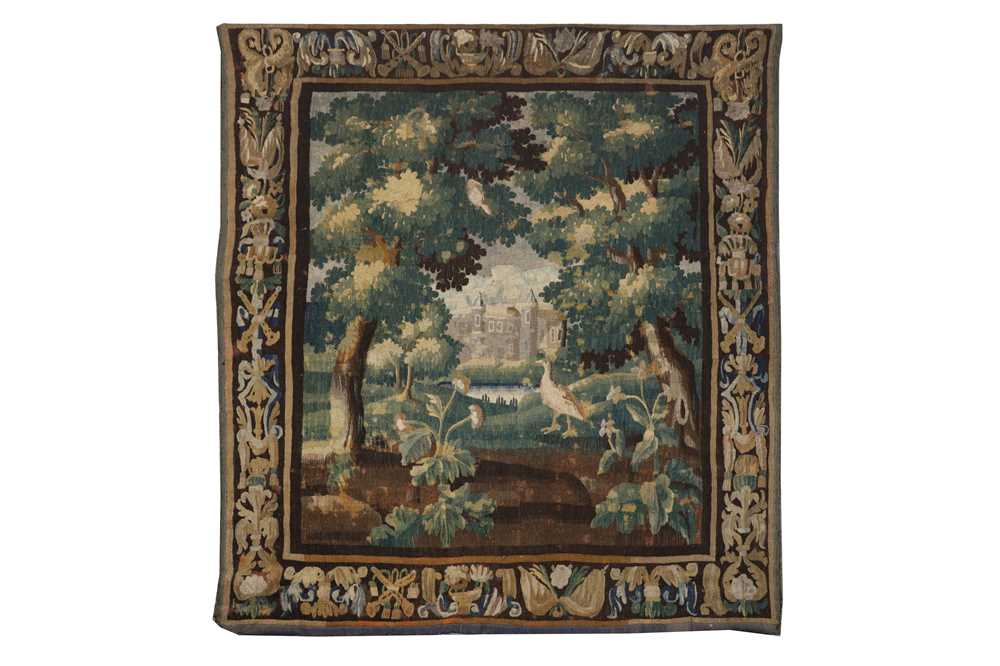 A FLEMISH VERDURE TAPESTRY, MID TO LATE 18TH CENTURY, depicting a duck between a pair of trees, framing a chateau to the distance, with plants to the foreground, enclosed by a rectangular border of scrolls and trumpets and emblematic motifs.

From the private collection of Alexander Berglas and thence by descent.

Alexander Berglas, a well-to-do doctor, he left Germany at the time of the rise of Nazism and opted for American nationality. Established in New York as a professor of oncology, his work in the field of medical research made Berglas one of the biggest names in world oncology. A member of the New York Academy of Sciences, he was elevated to the ranks of Commander of the Legion of Honor (under the Ministry of Foreign Affairs), and Grand Officer of the Order of Merit of the Italian Republic. Alongside his medical career, Berglas participated in the administration of several large textile companies: two in the United States, one in Sweden and one in Colmar, Ets. A. Kiener & Co. These latter, which in the 1920s represented one of the largest wool complexes in the East, employing up to 2,800 workers, were extremely hard hit by the Great Depression, when Berglas managed for a time to regain for them the markets lost in the Middle -East. After the Second World War, Berglas moved to Colmar where he controlled the textile company more closely, of which he himself exercised the functions of CEO from July 1950 to August 1968. In July 1957, he reorganized the company which took the name of “Manufactures lainières d'Alsace Berglas-Kiener”, and controlled the “Société nouvelle des Ets. Lacour” in Sainte-Marie-aux-Mines.

These tapestires hung in the family home in Colmar, France and have remained with the family ever since.