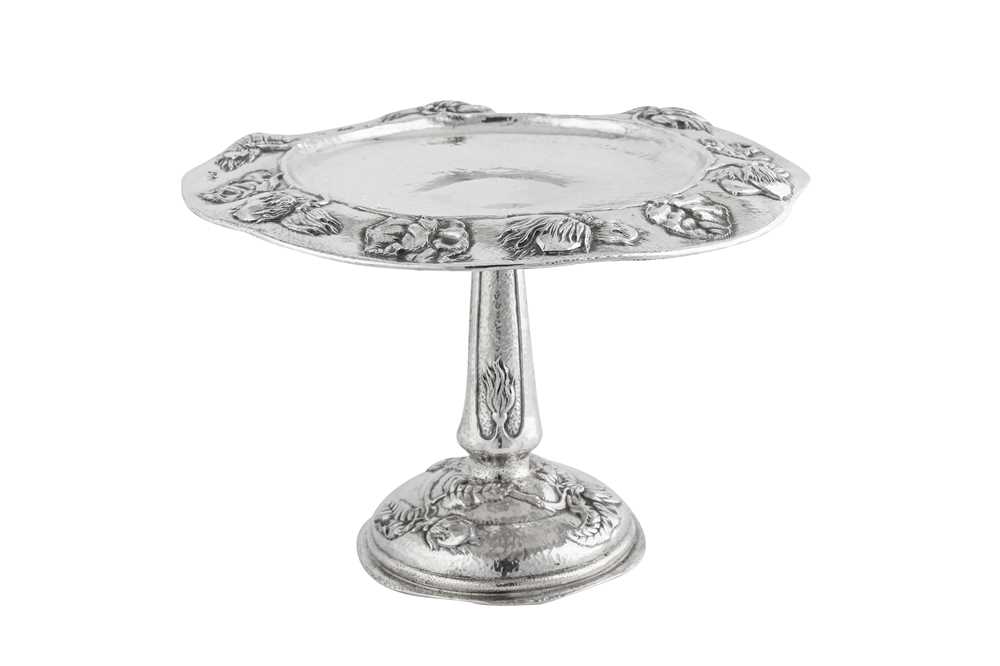 Of wavy circular form with a dished centre, all upon a domed pedestal circular foot. The edge with embossed decoration of thistles and leaves, repeated to the foot and stem, otherwise with plannished decoration. Fully marked to the centre boss, and with signature and date of 1906 to the rim edge.

The facsimile signature of Movio has been noted on Arts & Crafts silver pieces hallmarked between 1901 and 1907, bearing the sponsors mark of Johnson, Walker & Tolhurst, Goldsmiths and Silversmiths, Henry and Arthur Vander as well as Holland, Aldwinckle & Slater. Little is known about his life and work other than, he appears in the 1911 census as an Italian 'artist in metal repoussé'.

Given the style of his work, and the date when his signature begins to appear on silver, it seems probable that he was employed in the workshop of Gilbert Marks whose output ceased around 1902 due to failing health. Marks had previously worked for Johnson, Walker & Tolhurst and at whose showrooms he exhibited his silver from 1895 to 1901. Movio likely continued to work for them along with other retailers on his own account after leaving the employ of Marks, applying his own signature in the same style. Movio last appears as a 'chaser' in a 1934 trade directory.