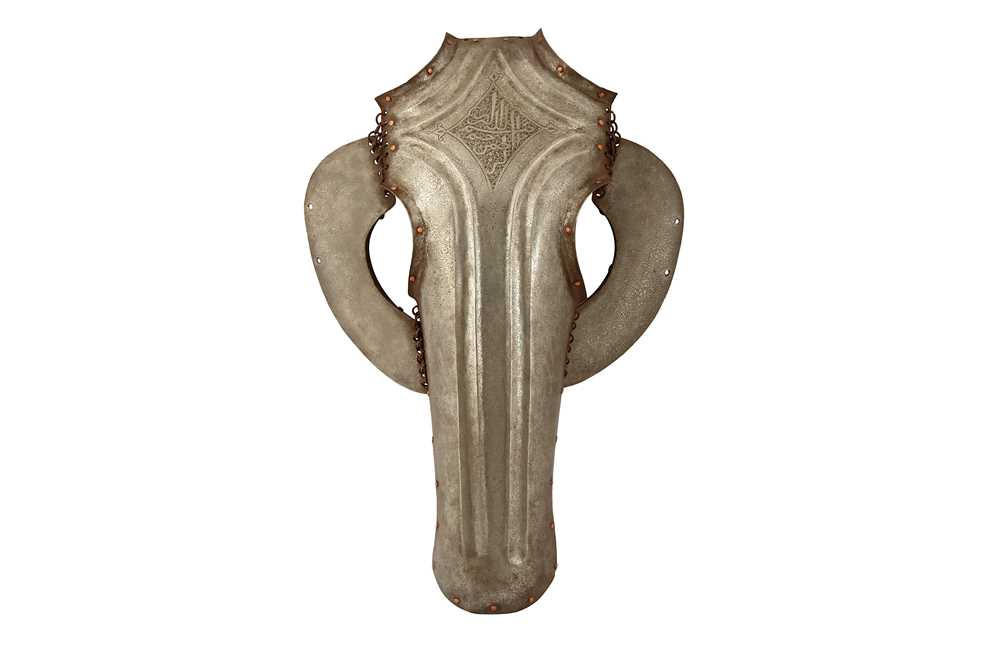 Formed from a single piece of steel to cover the horse's forehead, boxed over each side of the muzzle, flanged around the eyes and ears, the flat and plain steel cheek plates attached to the sides of the shaffron with short chain mail links, the forehead embossed with a pair of broad curved flutes framing the cusped epigraphic cartouche at the top incised with the basmala (bi-smi llāhi r-raḥmāni r-raḥīmi, "In the name of God, the Most Gracious, the Most Merciful"), the inscription arranged on four overlapping horizontal levels and set against scrolling vegetal spirals reminiscent of the decoration of early 16th-century Golden Horde style Iznik wares, each cusp surmounted by a stylised three-pointed arabesque palmette, copper studs all around the outer perimeter, 59cm x 47cm (when open).

This shaffron is accompanied by a purchase invoice which attests the shaffron was once part of the Wladimir Rosenbaum's collection of antiquities, which he was selling at his gallery in Ascona, Galleria Serodine. The Lithuanian-born Wladimir Rosenbaum (1894 - 1984) was brought by his father to Switzerland in 1902 and raised there. He quickly built himself a name as a respected lawyer, art collector, antiquarian, and later in life, an art dealer. In 1937, he decided to retire from his law career, and together with his wife, he set up the Galleria Serodine. After his death, the gallery yielded its space to the Museo Comunale d'Arte Moderna of Ascona. For further reference on Wladimir Rosenbaum and his collection, please see the Issuu catalogue by David Aron, London, 2020 (https://issuu.com/davidaaronltd/docs/da_iv/10?ff, last accessed 30/09/2021).

The baraki, also known as shaffron or chamfron, was a piece of essential armourial equipment in the Islamic lands, introduced to protect not only the horse's face but also the forehead of other animals dragged into battle, like camels, dromedaries, and later on, elephants. Steel shaffrons similar to ours can be seen in the collection of the Metropolitan Museum of Art, New York, inv. no. 36.25.510 (formerly in the Collection of George Cameron Stone); and in the private Frederick Stibbert's collection, Florence, inv. no. 6708. Both these examples are enhanced by epigraphic cartouches featuring auspicious inscriptions at the top of the forehead's plate. For other related examples in the Furusiyya Art Foundation Collection, please see Bashir Mohamed, The Arts of the Muslim Knight, 2007, pp. 340-341, nos. 326-327; and in the Nasser D. Khalili Collection of Islamic Art, David Alexander, The Arts of War, vol. XXI, 1992, pp. 88-89 and 93-94, nos. 41, 44 and 45.

Often, 16th-century shaffrons would also present the engraved Ottoman arsenal mark (tanğa) of St. Irene, lacking in our example. For analogous examples bearing the arsenal mark, please see Bonhams London, 11 May 2016, lot 40; and Christie's London, 26 April 2018, lot 83. Despite the lack of the mark, the shape and design of our shaffron appear to be consistent with these lots, suggesting that the original baraki model kept on being repeated with minor variations, regardless of time and place of origin.

*Please be aware this lot is subject to an additional 20% VAT charge on the hammer price.