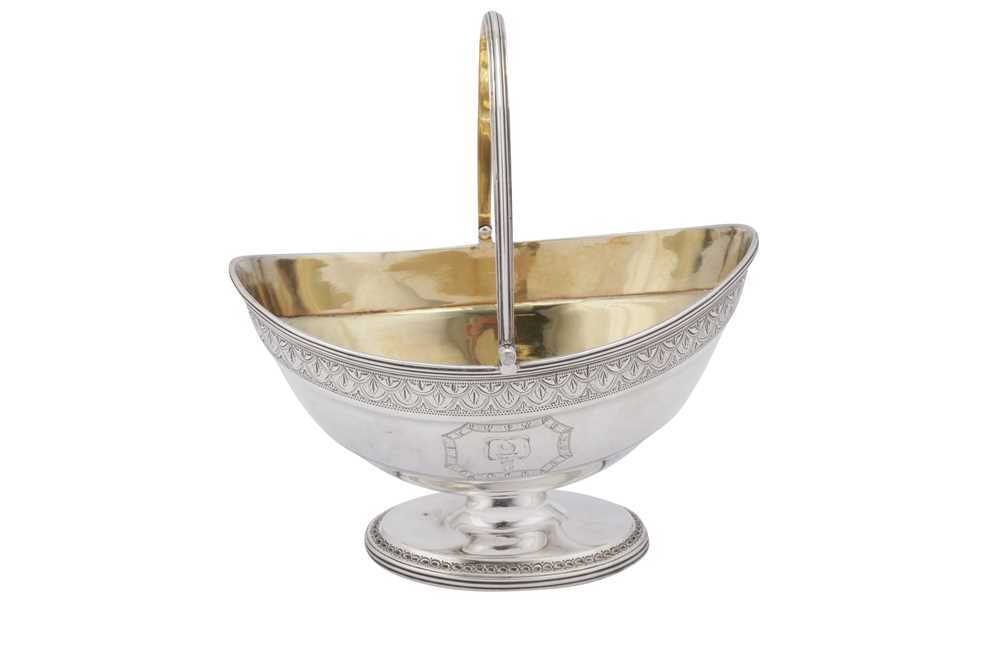 Of oval form with a moulded rim upon an oval pedestal foot. Opposable reeded swing handle. The body and foot with bright cut engraved bands of lunettes, each side with a shaped rectangular cartouche, one side engraved with quartered coat of arms in a shield shape with the motto below Speratum Et Completum, the opposing side with a crest of a crescent above a badge of honour within a ribbon. Gilt interior. Fully marked to the underside of foot, lion passant to handle.

His obituary reads: “in South Audley Street, in his 79th year, Matthew Robert Arnott Esq, Gentleman Usher of the Green Rod to the Knights of the most ancient order of the Thistle, and reading clerk and clerk to the private committee to the House of Lords which last office he filled with credit to himself and satisfaction to those noble personages during a period of 38 years” The Gentleman's Magazine (London, England), Volume 87, April p. 598).

He came to this position in March 1764 replacing William De Grey Esquire, who had resigned, being appointed by Ashley Cowper Esquire, Clerk of the Parliaments. On the 13th June 1766 he wrote to the William Henry C. Cavendish-Bentinck, 3rd Duke of Portland (1738-1809) to ask for the Duke to consider his request for a room after the alterations to the House are finished, whereby he points out he is the only clerk not provided with 'a House' and that his request is supported by Lord Marchmont and other peers. He became Gentleman Usher of the Green Rod in 1787 with which came the salary of £100 a year.

William Frisbee, apprenticed to John Crouch, free 6th Feb 1782, registered his mark with John Edwards at 48 Jewin Street, but registered a second mark alone 11th Jan 1792 at 51 Cock Lane, Snowhill, his third mark being in partnership with Paul Storr 2nd May 1792, same address, but this had dissolved by January 1793.