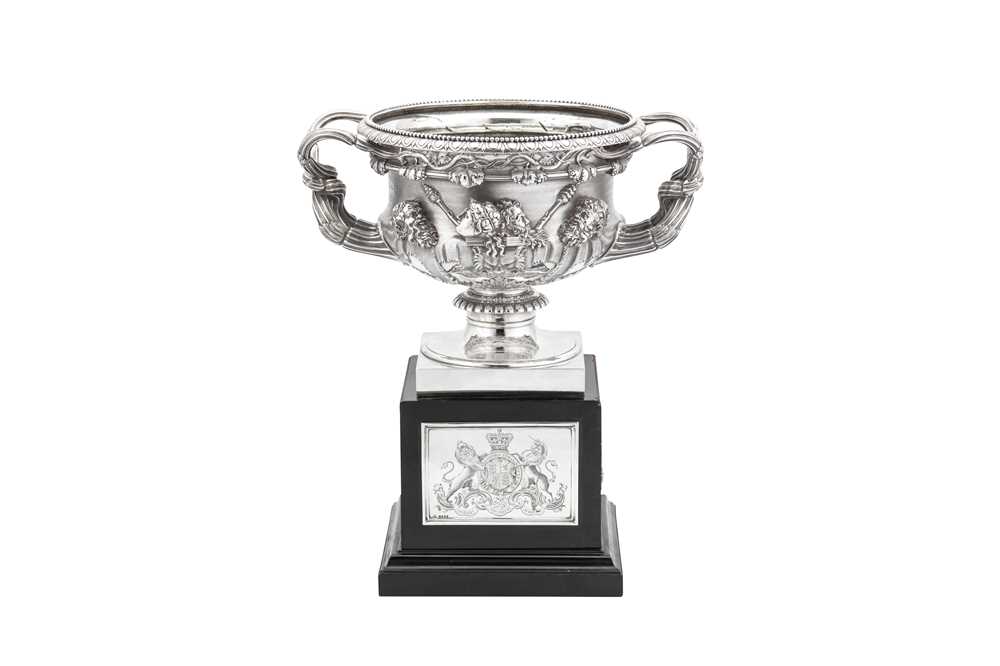 After the antique, on square foot and with spreading circular stem, the body cast and chased with a band of acanthus foliage and with lion's pelt and bacchic masks, applied below the egg-and-dart rim with trailing vines, with twin dual interlaced vine handles. The ebonised wooden plinth applied with two rectangular plaques and two vacant laurel wreath cartouches. One of the rectangular plaques finely engraved with the Royal Coat of Arms, the opposing plaque engraved with a presentation inscription reading “Plymouth, Devonport and Cornwall Races 1845, the gift of her Most Gracious Majesty Queen Victoria, Augustus Coryton Esqr, W. R. Fortescue Esqr, Stewards. Each plaque detachable to the underside with loop nuts. Fully marked to the side and to each plaque, the twelve original wing nuts with lion passant only. Stamped to the side of square foot HUNT & ROSKELL LATE STORR & MORTIMER 2225.

“Her Majesty’s Vase, value 100gs., for three-year-old and upwards – Heats, about two miles, starting at the T.Y.C. Starting-post, once round, to the Grand Stand Winning-post.

Born John Barker in accordance to the last will and testament of his maternal uncle Sir Charles Mill (1765-1835), he took the additional name of Mill by Royal Licence on 8 May 1835. The Reverend John Barker-Mill was created a Baronet 'of Mottisfont in the County of Southampton' on 16 March 1836. Barker-Mill died at Mottisfont Abbey, Hampshire in 1860.

The Plymouth, Devonport and Cornwall Races were moved to Chelson Meadow from land at Crabtree in 1828 on land enclosed by the Earl of Morley, when known as the ‘Plymouth and Devonport’ meeting. The racecourse was a flat, oval course of 12 furlongs (1.5 miles) with a straight run-in of 2 ½ furlongs. In 1833 the meeting was named 'The Plymouth, Devonport and Cornwall races'. Races continued to be held here for two days in late August (1882) or early September (1891) each year until 1926. The final meeting took place on Thursday 4th September 1930.

Royal Plates universally offered a prize of 100 Guineas and were first introduced during the reign of King Charles I, it did not require participants to pay an entry fee. The inaugural Royal Plate was held at Newmarket on Friday 1st March 1634. To the end of 1854 there were 910 Royal Plates spread across 45 different racecourses, three of which Brighton, Plymouth and Down Royal hosted a Queens’s Plate for the first time during her reign, at a cost of £91,000 to the Crown, equivalent to £11.8 million in 2021. Plymouth held its inaugural Royal Plate in August 1842. The race for this cup was held Wednesday 13th August 1845 (421st), Giantess, a Brown FiIlly, also went on to win a Royal Plate at Weymouth Friday 5th September 1845 (429th). Sir John Barker Mill also won a Royal Plate with Cymba at Winchester Tuesday 27th June 1848 (562nd) and with Miss Ellis as a walk over at Salisbury Thursday 13th August 1846 (475th). His horse Pugilist came second at Winchester Wednesday 2nd July 1845 (410th).

Leviathan (1823-46) the sire of Giantess, at the very large 16 hands for the day, won 16 of 21 starts winning the Ludlow Gold Cup, Warwick Gold Cup, Derby Gold Cup and the Litchfield Gold Cup (walk over). He was then sold for 2,000 guineas to King George IV, who was interested in winning the Ascot Gold Cup, which was rapidly increasing in prestige. However, Leviathan became unsound and was given a year off to recuperate. Later imported to Tennessee. From his sire Muley's line, this includes two dams named Young Giantess and Giantess.

A colossal Roman marble vase measuring nearly six feet high, dates from the 2nd century A.D. It was found in fragments in 1770 at the bottom of a lake at Hadrian's Villa near Rome by a group of Englishmen and was acquired by Sir William Hamilton, at the time Ambassador to Naples. Hamilton in tum sold it, now restored, to his kinsman, Charles (Greville), 2nd Earl of Warwick, who set it up in the grounds of Warwick Castle. The vase had been engraved by Piranesi in 1778, and these prints provided the inspiration for versions of the vase in silver and silver-gilt during the Regency period. Rundell, Bridge and Rundell, the royal goldsmiths appear to have supplied most of the Warwick Vases, the most notable being the set of twelve commissioned by the Prince Regent and struck with the marked for Paul Storr, now at Windsor Castle. The Duke of York, second son of George III, owned a set of four which were included in the sale of his silver at Christie's in 1827.

Of his marble vase, the Earl of Warwick wrote “I built a noble greenhouse, and ... placed in it a Vase, considered as the finest remains of Grecian art extant for size and beauty." The vase, however, did have one critic. The Hon. John Byng, later 5th Viscount Torrington and author of a series of fascinating and at times irascible journals of his rides through England, spoke thus of the Roman monument when describing his visit to Warwick Castle: "The upper court is environed by old walls and turrets, o'erhung with ivy; the portcullis down; and nothing to disgrace the taste of antiquity, but a vulgar overgrown Roman basin in the center of the court; which I would toss into the center of the river, or give to the church for a font!" (C. Bruyn Andrews, ed. The Torrington Diaries, a selection from the tours of the Hon. John Byng between the years 1781 and 1794, London, 1954, p. 102).