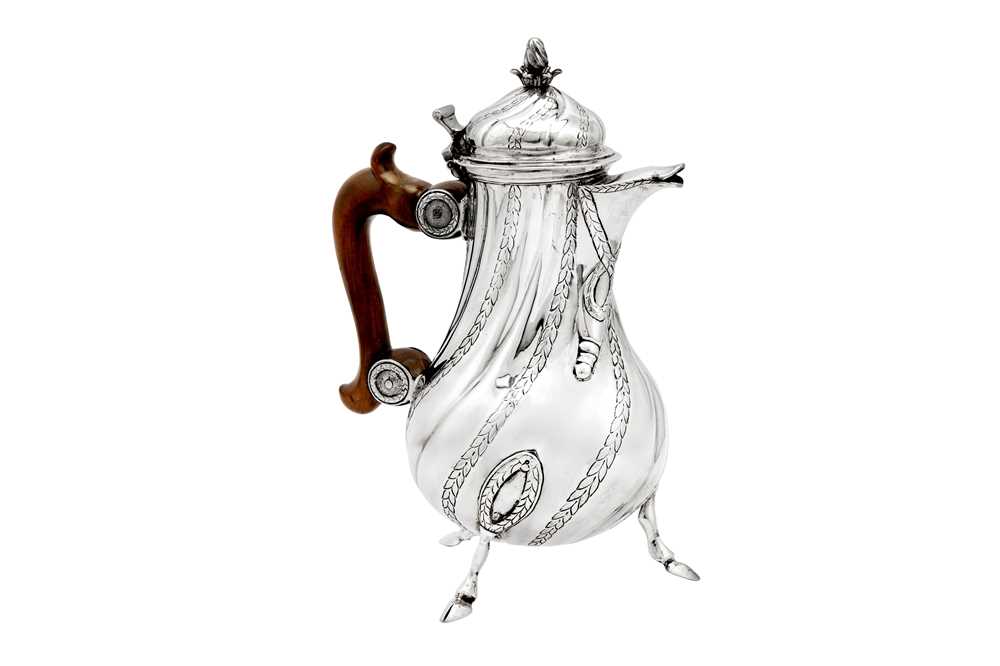 De Rohan period (1775-97). Of baluster form upon three hoof feet with cast and chased oval junctions of rosette wreathes. The original carved fruitwood handle pinned to disc junctions chased with leaves, opposite a short spout leading to a hinged domed lid raised by a shaped thumbpiece surmounted by a detachable wrythyn pyriform finial above a leaf calyx. The body and lid with spiral fluted decoration chased with conforming bands of laurel leaves, the legs also in a spiral fashion. Marked with a crowned M (Farrugia 23K) for Maltese standard (875 standard), a crowned X and makers mark GA (Farrugia 63). Assay scrape to the interior of body. The lid unmarked.

Giovanni Arrotin registered a new mark in cursive script in 1781.

This coffee pot is in the upper quartile of height and weight, another De Rohan period example by Gaetano Offennaghel, 27.5 cm, 28 ozt which also had cast and chased laurel junction was sold Woolley and Wallis, 28 Oct 2009, lot 818 (£6600 hammer)

“Coffee pots and sugar basins were manufactured separately and, though in some cases they may be matched, one cannot be sure that the silversmith in question was commissioned to produce two matching separate items.” Farrugia, J., (1992). Antique Maltese Domestic Silver, Valetta: Said International. P.51. The use of hoof feet with quite prevalent in De Rohan period Maltese sugar bowls and coffee pots, however most of these are wrought in a single direction away from the body, or with a modest curvature as seen on the sugar bowl and cover by Guiseppe Maniscalco di Andrea sold these rooms, 30 Oct 2020, lot 249 (£2,250 inc. premium). It is therefore worthy of note that on the present lot the feet and junctions form such a generous curve in line with the spiral fluting of the body. The silversmith has had to work the cast elements of the legs in two separate sections between the knees and junctions to not push a single casting too far.