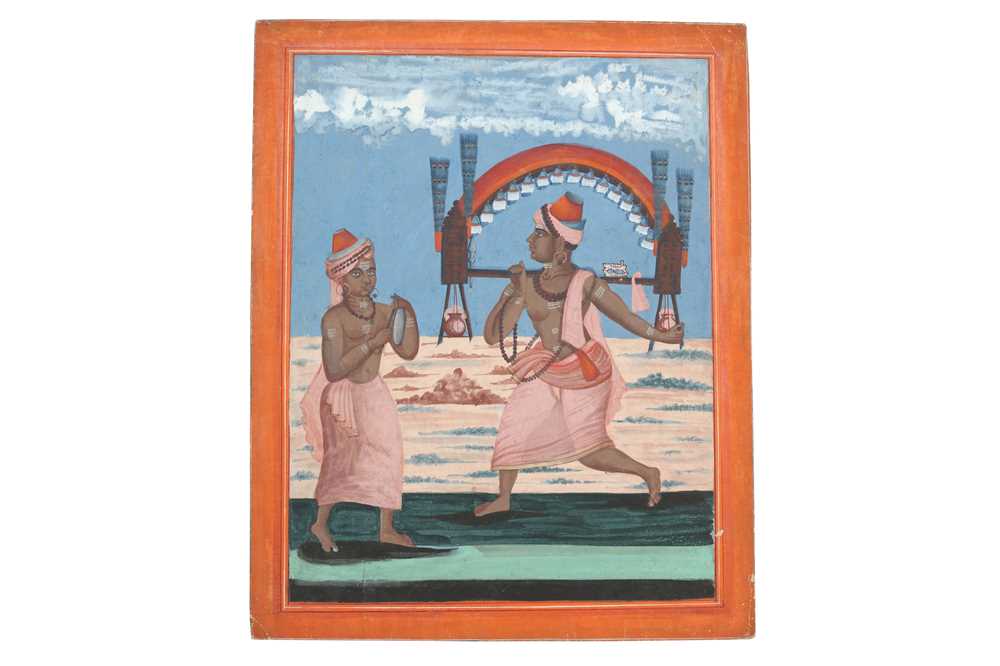 Opaque pigments on thick buff paper, the vertical composition depicting a South Indian pandit carrying a processional kavati on his shoulders with holy water pots, peacock feather fans, carved columns with stepped capitals, and an orange wooden arch decorated with tassels and chimes, wearing several strands of rudraksha beads, his body marked with several tripundra marks, the typical Shaivite tilaka with three horizontal lines, his disciple standing next to him and looking straight at the beholder whilst ringing a musical plate, possibly a call to prayer, the scene set within white and red rules and bright red borders, the recto plain except for an English inscription in sepia ink reading Pynee Pundaurum and his Disciple, no. 26, 37cm x 30cm.

The inscription on the recto offers food for thought. At a first glance, the first word may look like Pune, but the attire and style of the two characters suggest a South Indian setting and origin. The word Pundaurum seems to have been in use in the first part of the 19th century to describe Hindu pandits, scholars or teacher with specialised knowledge in Hindu practices and rituals. In 2013, Sotheby's London sold a large Company School album illustrating costumes, trades, dignitaries, craftsmen and processions (24 April 2013, lot 106). The large watercolour album was produced in Vellore, Tamil Nadu, South India in 1832 - 1835. Plate no. XIX illustrated a typical South Indian pandit and was accompanied by the caption Pundaurum.