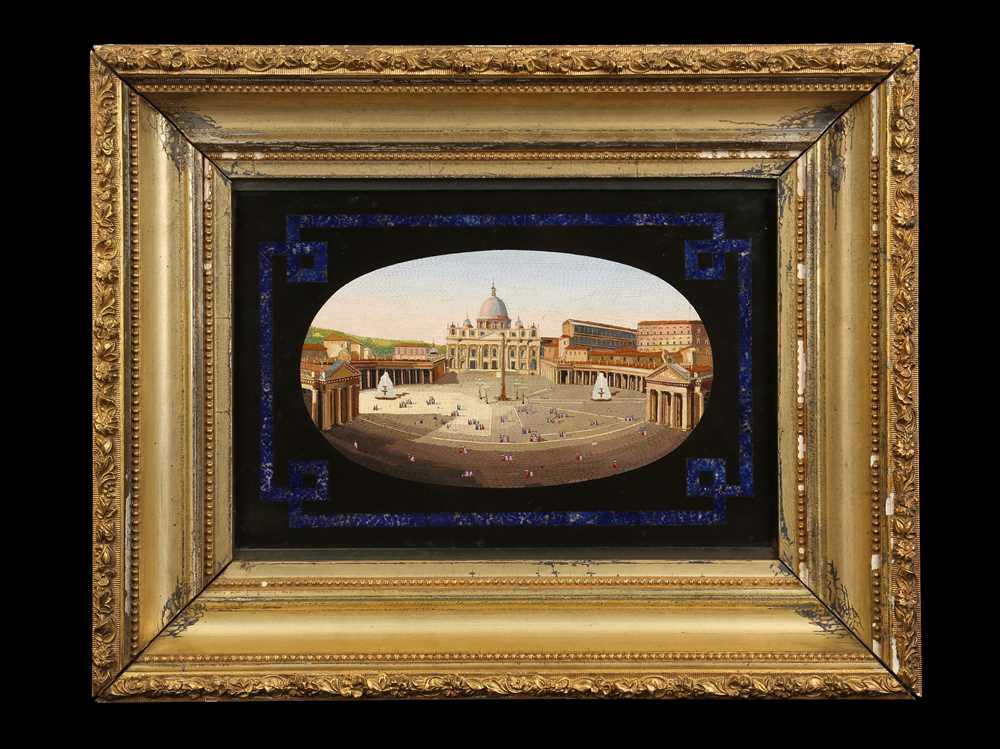 the horizontal oval depicting St Peter's Basilica and Square, bordered on two sides by curved collonades with central obelisk between two fountains, groups of figures gathered in the square, the fine tesserae reserve set within a black marble ground with lapis lazuli border, mounted in a giltwood and gesso frame,

Auction Comparable: See Sotheby's, New York, 6 June 2014, lot 147 for a comparable micromosaic of the same subject, featuring an identical geometric border but in malachite rather than lapis lazuli, attributed to the Vatican mosaic workshops (The Studio del Mosaico Vaticano).

The Vatican micromosaic workshop was originally founded in the late 16th century to provide the mosaics to decorate the basilica of Saint Peters; but continued to produce micromosaics for the open market for centuries after. Many artists employed in the workshop later went on to open their own premises, and the market for micromosaics flourished throughout the 19th century. Numerous micromosaic depictions of St Peter's Square were produced during the period due to its popularity as a tourist attraction. The Basilica was begun in 1506 by Bramante (1444 - 1514) and later modified by Michelangelo (1475 - 1564) who designed the dome, completed by Maderno in around 1606. The colonnade was added by Bernini in 1657 along with the fountains by Maderno and Bernini, the central obelisk was originally in the Circus of Nero (AD 54- 68).