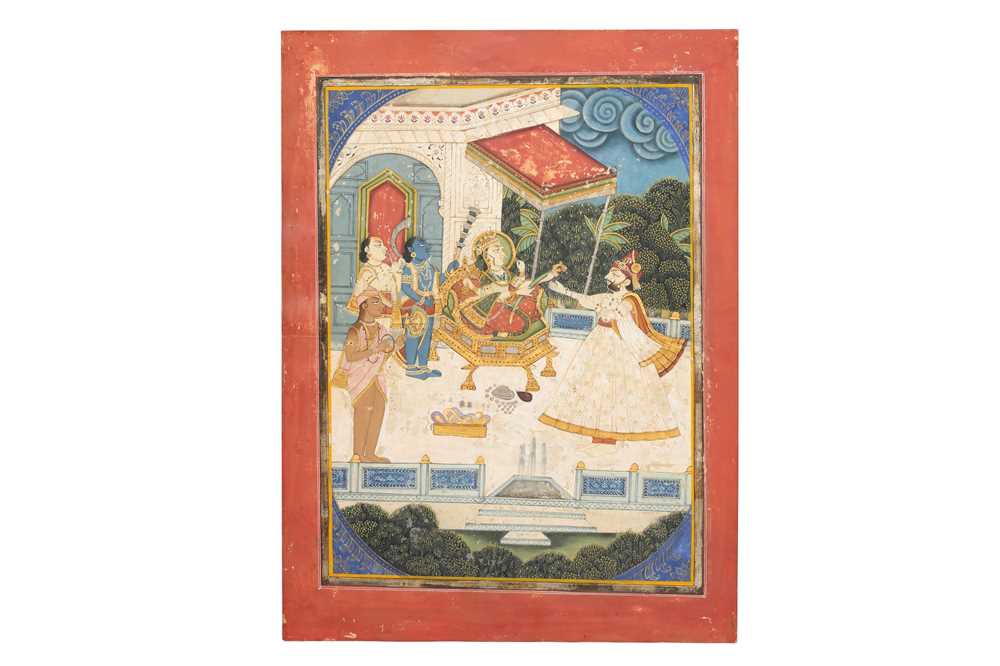 Opaque pigments, gold and silver on paper, the vertical composition depicting Takht Singh, ruler of Jodhpur (1843 - 1873), being handed a gold-hilted tulwar sword by the Hindu goddess of chastity and fertility, and patroness of the hijra community, Bahuchara Mata, portrayed on an encrusted golden throne under a red canopy on a palatial terrace, the deity holding the sword, her typical attribute, and handing it over to the ruler with a smile, in another hand a small golden ewer, another typical attribute of this deity, standing behind her Kala and Gora Bharaiva, recognisable thanks to the colour of their skins, and a half-clad sadhu with a pink turban, holding a rosary bead necklace in his hand and a golden fan on the other, the scene set within black and white rules, and ochre, silver and bright red borders, mounted on a white cardboard frame, 43cm x 32.3cm.

Hijras are a sub-community within India's LGBTQIA+ population. They are usually transgender women and intersex individuals, who tend to dress in mainstream-identified women's clothing and makeup; some will even undergo sacrificial emasculation (castration). They also often use women's names. In the past, in order to identify as hijra, a person first needed to be ritually adopted into the community, however, the criteria for joining are more relaxed today. Indian Hijra communities have appeared in many scholarly works, particularly in recent years with the growth of Queer Studies. Similar to LGBTQIA+ individuals from all over the world, they have often been subject to discrimination, violence, and ostracisation in the past.

Like with much of Indian identity, religion is a key aspect of the hijra identity. Bahuchara Mata is a Hindu goddess of fertility and was once attacked by a marauder, Bapiya. In retaliation, Bahuchara Mata and her sisters cut off their breasts and cursed Bapiya with impotency. He could only lift the curse by worshipping Bahuchara Mata and wearing women's clothing.