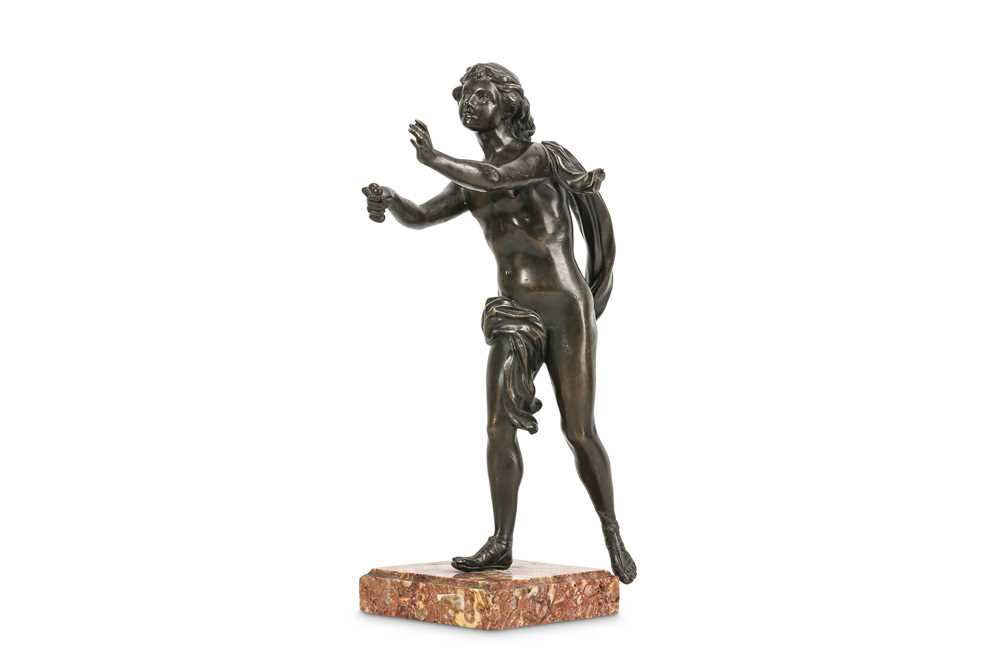 Click for high resolution
A BRONZE STATUETTE OF APOLLO, PROBABLY DRESDEN MIDDLE OF THE 18TH CENTURY AFTER THE ANTIQUE MARBLE ORIGINAL OF APOLLO AND MARSYAS, RESTORED PERHAPS BY ERCOLE BOSELLI (ACTIVE BEFORE 1667) the figure of Apollo with arms outstretched, his drapery swirling around his nude body, raised on his right foot with his left leg outstretched, mounted on a later square marble plinth,  the bronze 32cm high With thanks to Dr Charles Avery for his assistance with researching this bronze. The present bronze statuette is thought to represent Apollo holding a knife, about to make the first cut whilst flaying Marsyas. It appears to be derived from a known group that is in part ancient and in part a 17th century reconstruction that also depicts Apollo about to flay Marsyas. This large marble group combined an ancient figure of Marsyas with a fragmentary Roman torso of Apollo which may once have formed part of a group depicting Apollo and Daphne. The restorer / carver may have been Ercole Boselli, and Montagu points out the obvious similarity to the famous Bernini composition of Apollo and Daphne, which Boselli was clearly influenced by when he 'restored' the group. The marble was purchased in 1728 from the Chigi Collection for Dresden and the appearance of the present bronze, the brassy alloy and the dark brown, almost black patination are all consistent with what would be expected of a copyist working in Dresden in the 18th century.  Related Literature: Jennifer Montagu 'Roman Baroque Sculpture: the Industry of Art', New Haven / London, 1989, p. 163.