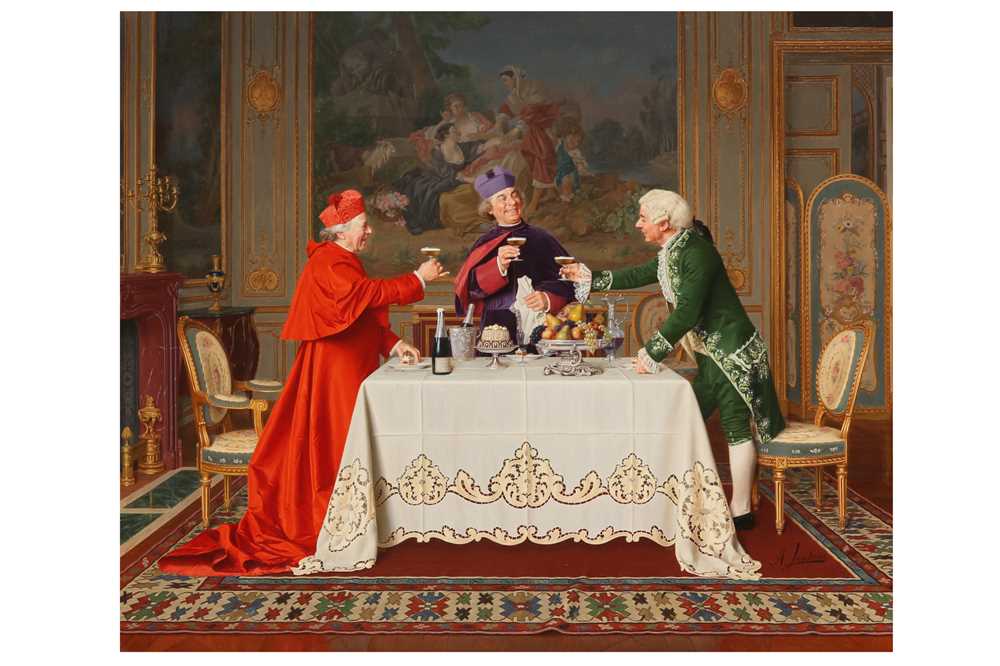 Property from an English Private Collection

PROVENANCE:
Willow Gallery, Weybridge
Purchased from the above by the present owner in May 2002

Landini became a master of sending up the pampered lives of clerics in his elaborately constructed and extraordinarily detailed work. In the present painting two robed prelates and their richly attired man servant in a luxuriously appointed salon stand up to raise a glass to celebrate their privilege. On a pristine lace tablecloth a champagne bottle is uncorked, while a second is cooling; a delicious dessert awaits on a silver stand next to an elaborate cornucopia of fruit. To the right is a carafe of wine. On the wall behind them between ornate pilasters hangs a tapestry of three nattering women in the style of Boucher, the master of pompous inconsequence. The setting is secular, the occasion in all likelihood trivial, as the male triumvirate mimic the Holy Trinity – Father, Son and Holy Ghost – the three men standing around what is clearly an altar of earthly delights.

Cardinals, Cavaliers and Gentlemen of learning

Assembled some twenty years ago lots 358 to 367 offer a particularly fine and representative selection of costumbrista pictures – cardinals, cavaliers and gentlemen of learning. These include four especially fine examples by the leading exponents of this singular genre: George Jehan Vibert, Andrea Landini and Francois Brunery.

The ever popular subject matter offers a retreat into the past, and the chance both to celebrate and poke fun at a wide variety of male past-times and peccadilloes in historicizing styles. In each the protagonists act out small moments of little consequence dressed up in the frills and furbelows of seventeenth- and eighteenth-century fashions, or in many instances in the elaborate pomp and ceremony attached to ecclesiastical garb. This last theme, especially popular in predominantly Catholic countries – France, Belgium, Italy, Spain and Southern Germany, provided a rich vein of material for an audience increasingly sceptical of the probity of the church. In other scenes musicians and gentlemen of letters are presented in opulent dress in magnificent surroundings of earlier centuries.

By so cloaking their protagonists, artists avoided the risk of pandering to the fashions of the day that would quickly become outdated. Instead their compositions exude the timeless taste, elegance and luxury of yesteryear. To paraphrase Hook and Poltimore, in a century of increasing industrialisation it was a world of sedan chairs, not railways; of muslin and brocade not coalmines; of refinement, not contemporary grossness. (P. Hook & M Poltimore, Popular 19th Century Painting, Woodbridge, 1987, p. 296). As the Merchant Ivory 'period dramas' of their age, today the viewer glimpses an extraordinary never-never world of splendour and excess through the lense of some of the most technically talented painters of the period.