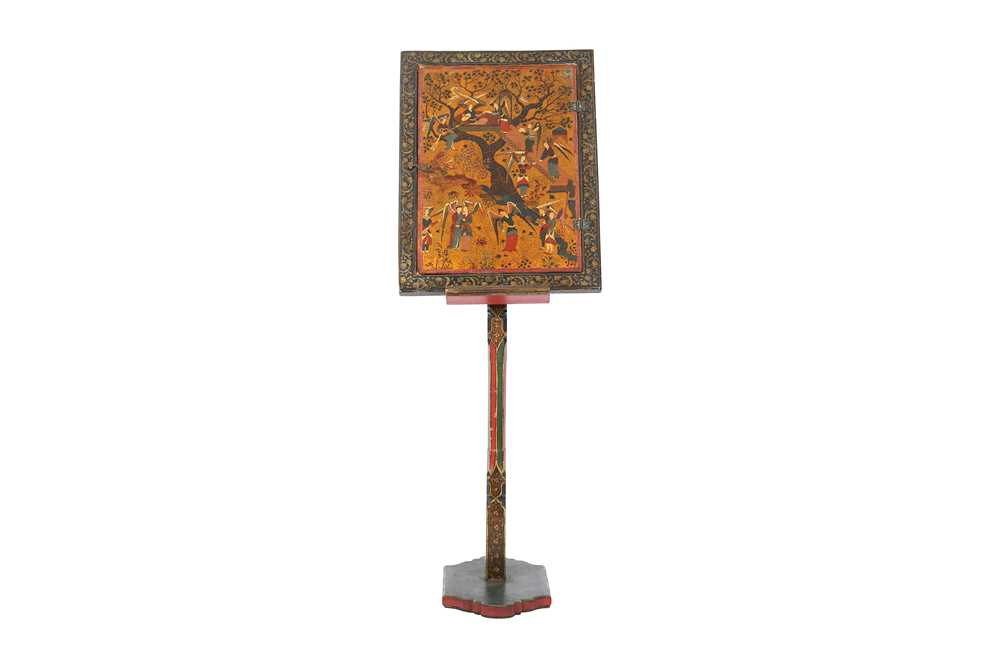 The mirror case of large rectangular shape, with a hinged cover, the front and back polychrome-painted, gilt and lacquered, the dense figural decoration on the lid depicting a lively banquet of angels taking place in a paradisiacal lush garden with a large tree nearby a river stream and fully blossomed flower bushes, the angels busy at serving food, drinks, dancing and chatting together, the hustle and bustle under the strict supervision of a dark-skinned gatekeeper on the right-hand side leaning onto his red cane, the back with another banqueting or bacchanalian scene, this time set in a real garden on earth, with a group of human musicians on the right, whirling dervishes and shamans dressed in ibex and wild goat's fur dancing in a trance on the left, their ecstasies and dance caused by the heavenly music played by two winged angels seated on the branches of the large tree in the middle of the composition, both scenes set on a thick gold glitter ground, the outer border with a gilt vegetal scroll with rosettes and stylised saz leaves on a black ground, the edges with cartouches filled with white ink nasta'liq inscriptions, the interior of the lid with a lonely musician playing in the wilderness, the stand polychrome-painted, gilt and lacquered with bands of rosettes at the top and bottom and alternating two-tone vertical bands in the centre, the mirror case 40cm x 29cm, the stand 73cm high.

The inscription around the edges: Sonnet 226 of Sa'di [the poetical text is about merry gatherings, dancing, the reunion with the Beloved, the superior, enhanced beauty of the Beloved, and further references to joyful moments, an obvious companion to the figural decorations].

A very similar mirror case attributed to the Imami workshop and featuring an analogous Safavid-revival scene was successfully sold at Nagel Auction, 6 November 2001, lot 828 for €7,250 EUR hammer price. Imami lacquered artworks distinguish themselves for very vibrant figural scenes often packed with action and group gatherings. The characters are often inspired by major Persian poems and romances and drawn in a pictorial style reviving the pictorial tradition and productions of Reza Abbasi's Isfahan school, adding a spark of movement and dynamism to the overall composition and elongating the figures further, giving them a more eerie appearance.

The two scenes presented on this mirror showcase a very similar compositional structure, the only difference being the angelical versus human nature of the participants. This choice could lead to the interpretation that one banquet is taking place in Paradise, and the latter on earth, proving the tangible and concrete connection between the two realms, often highlighted in several Sufi poems. For similar lacquered works of the Imami workshop, please see Christie's London, 11 October 2005, lot 128; and Sotheby's London, 24 October 2007, lot 176.

*Please be aware this lot is subject to an additional 20% VAT charge on the hammer price.