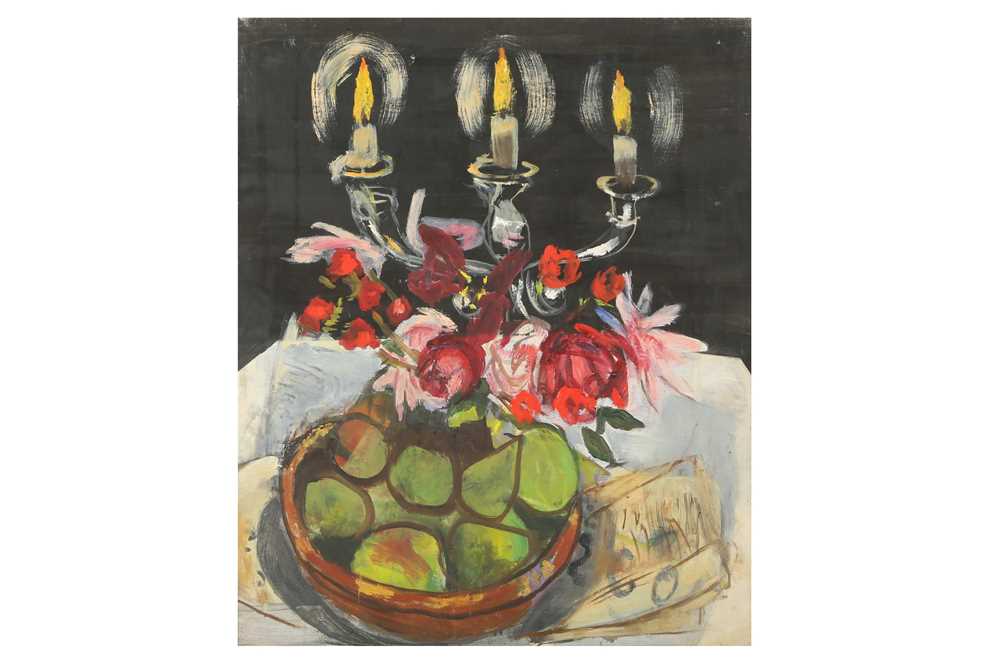 Painted in the 1940s, Motesiczky uses the flickering flames of three lit candles to illuminate a still life that incorporates tokens of love and abundance. Set before the candelabra is a large and vibrant bouquet of red roses; in the foreground, placed on a newspaper is a cornucopia of apples and pears. The motifs of flowers, fruit and the written word may well reference the happiness she was experiencing at the time with the writer Elias Canetti, the dancing light of the candles silhouetted against the black background perhaps reflecting a moment of magic in the relationship. A preparatory sketch for the painting is now in the collection of Tate’s Archive, the only significant difference being the introduction of the newspaper under the bowl of fruit in the finished work.

The nine oil paintings by Viennese emigré artist Marie-Louise von Motesiczky (1906-1996) offered in this sale, follow the sale of eight works on 4th December 2020. Once again the lots span four decades - from the 1940s to the mid-1980s.

Marie-Louise von Motesiczky enjoyed a privileged childhood, living with her parents and brother on Brahmsplatz in central Vienna. Her mother Henriette was scion of an illustrious Viennese Jewish banking dynasty. Her maternal grandfather, Leopold von Lieben, was President of the Stock Exchange; her grandmother, Anna, one of Freud’s early patients. She counted the Todescos, and Ephrussis among her family circle, and she, her mother and her brother Karl spent their summers at Villa Todesco in Hinterbrühl, south west of the capital.

But over time family tragedy, financial difficulties and the rise of Nazi Germany took their toll. Marie-Louise’s father had died in a hunting accident many years before and her mother’s considerable inheritance gradually diminished through high taxation, poor investments, and the financial crash of 1929. Then, with the rise of the Third Reich and the Anschluss, when Austria was annexed by Germany, she and her mother fled Vienna for the Netherlands before emigrating to England in 1939. Further distress followed when her brother Karl, who had remained in Austria, was arrested and deported to Auschwitz, dying of typhus there on 25 June 1943.

The most formative influence on Marie-Louise's artistic development before the War was the German painter Max Beckmann. She had first been introduced to Beckmann in 1920, and kept in regular and close contact with him thereafter. As she recalled: ‘A winged creature from Mars could not have made a greater impact on me’. Later, on her arrival in Britain in early 1939, Marie-Louise was reacquainted with Oskar Kokoschka, a family friend now similarly exiled. In London Kokoschka ensured her inclusion in a series of group exhibitions, and assisted her in the staging of a one-person show at the Czechoslovak Institute in the autumn of 1944. Further group shows followed, and in 1960 she had a second solo exhibition at the influential Beaux Arts Gallery off Bond Street. On the Continent she received wide acclaim for her work in exhibitions in Amsterdam and The Hague in 1952, one of her canvases being purchased by the Stedelijk Museum. The same decade she exhibited in Munich and Düsseldorf, and in the 1960s was the subject of shows in Austria and Germany.

In 1985, a full twenty-five years after her work had been shown at the Beaux Arts Gallery, she was the subject of another one-person exhibition in London, at the Goethe-Institut which was widely acclaimed in the press. In 1994 a major retrospective of her work was held in Vienna at the Österreichische Galerie, Oberes Belvedere and in Manchester at the City Art Gallery. In 2006-07 her work was celebrated in a centenary exhibition at Tate Liverpool, travelling to Frankfurt, Vienna and Passau and Southampton City Art Gallery. Also in 2007 Jill Lloyd’s biography of Marie-Louise appeared: The Undiscovered Expressionist. A Life of Marie-Louise von Motesiczky, followed in 2009 by the catalogue raisonné of her paintings by Ines Schlenker itemising over 350 works. Most recently, in 2019-20, Tate Britain held an exhibition devoted to her to inaugurate the gallery named in perpetuity as the ‘Marie-Louise von Motesiczky Archive Gallery’ for all future displays of Tate’s archive holdings in general.