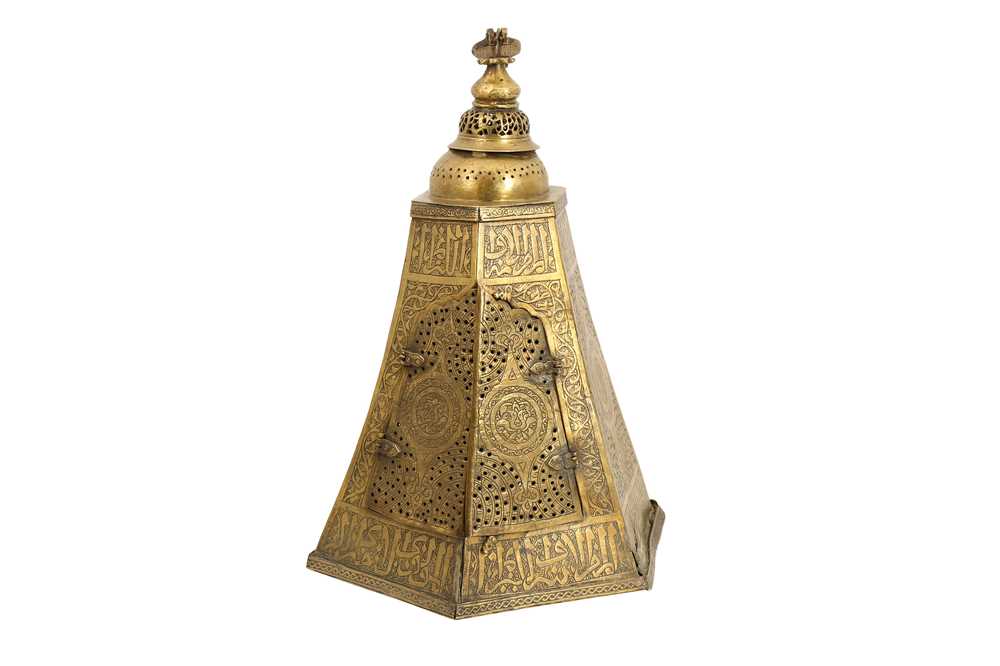 Of hexagonal shape, resting on a flat underside with three large circular open roundels, two of the metal frames surrounding the base a later, 19th-century replacement, rising to a stepped dome-shaped terminal decorated with a foliate openwork inscription and surmounted by a later brass hook for suspension, on one side a set of hinged openwork doors, the inner panels of the doors engraved in bold thuluth script, the exterior decorated with repeating ogival medallions featuring lotus blossoms surrounded by openwork scrolls, framed within registers of bold thuluth calligraphy, 29cm diam. and 55cm high.

On the openwork register of the dome-shaped terminal: Glory and Prosperity (repeated)

Around the base, top band: His most Noble, the Honourable, the Exalted, the Lordly, the great Amir

Around the base, lower band: His most Noble, the Honourable, the Lordly, the great Amir, the Masterly, the Possessor, the Well-served, the Learned, the Diligent, the Just, the most Excellent, the most Glorious, the most Magnificent
A similar epigraphic inscription, analogous in both its content and calligraphic style, can be found on a large brass Mamluk tray dating to the 14th century, now part of the Palazzo Abatellis collection in Palermo (inv. no. 7276). The central medallion is also engraved with three lotus flowers against vegetal sprays inside intertwined geometric bands, a motif repeated on each side of our lantern. The epigraphic inscription on the tray in Palermo refers to the Amir who once owned it, stating he was an official of al-Malik an-Nasir, most probably Muhammad ibn Qalawun (Ursula Staacke, I Metalli Mamelucchi del Periodo Bahri, 1997, pp. 88 - 91, cat. 10).
For further examples and reading on Mamluk and post-Mamluk metal lamps, which include similar pieces to the present example, please see D. Behrens-Abouseif, Mamluk and Post-Mamluk Metal Lamps, Institut Français d’Archéologie Orientale, 1995, pp. 69 - 73.