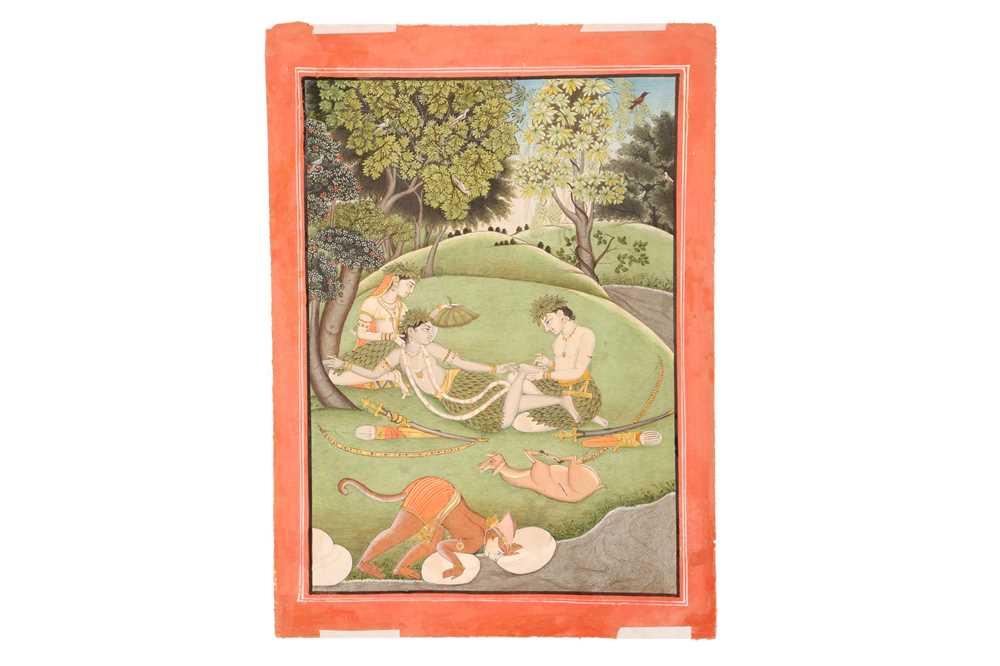 Opaque pigments heightened with gold on paper, the vertical composition depicting a tender intimate scene illustrating a passage from the Ramayana epic when after hunting in the forest, Lakshmana offers to pluck out a thorn from Rama's foot, Sita fanning Rama with a large leaf, Rama indicating to Lakshmana the point of discomfort in his foot, a deer lying next to Lakshmana's hunting gear, and the Monkey-God Hanuman portrayed in the foreground drinking from a river, the three main characters all dressed in skirts made of leaves, the usual attire of jungle dwellers, indicating the time of their exile from Ayodhya living in the forest, the scene set within black and white rules, and bright red borders, mounted, framed and glazed, the painting 20.3cm x 14.5cm, 44cm x 36cm including the frame.

The dense and intricate sequence of events narrated in the Hindu epic of the Ramayana has proved to have a special place in the mind and heart of Pahari School painters. Indeed, as Khandalavala explains, in the artists' ateliers the Ramayana possessed a much greater appeal than the Mahabharata thanks to the circulation of Tulsidas' (1532 – 1624) version of the story, the Ramcharitmanas, which was written in the vernacular Awadhi instead of Sanskrit (Karl J. Khandalavala, Pahari Miniature Painting, 1958, p. 44). The change in language allowed more devotees to learn about the epic and thus, develop a personal 'favourite list' of the narrated episodes. The scene of Lakshmana removing the thorn from Rama's foot became one of these favourites. It may surprise that such a trivial incident was worth depicting, but the intimacy and genuine affection conveyed in this scene must have cast a strong impression on Pahari painters, who started producing a number of illustrations with this subject.

Aside from our example, this exact scene is reproduced in three other paintings, all attributed to the Pahari school of Kangra and dating to different years in the first half of the 19th century. The illustration known about for the longest period is the one in the Kronos collection, which used to belong to Douglas Barrett and was featured in a number of publications, including D. Barrett and B. Gray, Painting of India, 1963, p. 184; M. Lerner, The Flame and The Lotus, 1984, no. 65; and more recently, Divine Pleasures: Painting from India's Rajput Courts - The Kronos Collections, exhibition catalogue, MET, New York, 2016, cat. 93, p. 240. This painting showcases all the essential features of 1800 - 1810 Kangra paintings, including the gentle lines and contours of the figures' bodies, the soft palette, and the decorative border with gilt vegetal trellis on dark blue ground. The second example with similar characteristics, but wrongly attributed to Krishna and dating to 1830, was successfully sold at Christie's London, 6 October 2011, lot 406. The third illustration is a slightly later version of this scene, dating approximately 1840, and it was bequeathed by two donors (Manuk and Coles) to the Fitzwilliam Museum in Cambridge in 1948. The palette is much gaudier and the contouring lines harsher and sharper, in line with what Khandalavala describes as the 'swan song' of Kangra paintings which saw a progressive deterioration and greater stylisation of the previous canon. This period starts after the death of one of Kangra school's greatest patron, Sansar Chand (r. 1775 – 1824) (Karl J. Khandalavala, Pahari Miniature Painting, 1958, p. 160).

It is very likely that our example, the fourth known, is dated to the period following Sansar Chand's death and would therefore fall into the same dating category of the Christie's London and Fitzwilliam Museum illustrations. The facial qualities of our characters exhibit many elements of the Kangra Standard type (ibidem, p. 146), including nose drawn almost in a straight line with the forehead; flat faces devoid of cheeks and modelling; long, narrow and curved eyes, almost in a 'triangular' shape; and pouty lips. The contouring lines appear to be thicker, and the palette darker, departing from the very soft hues typical of the 1780 – 1800 period. Lastly, our painting presents bright red borders, a choice typical in Rajasthani painting, not in Kangra models. The slightly later dating of our lot compared to the Kronos collection example does not diminish its art-historical value. It only proves that Pahari painters kept evolving and introducing minor changes to the established pictorial canon despite the lack of a strong patron, honouring in this way the past tradition whilst moving forward to modern times.