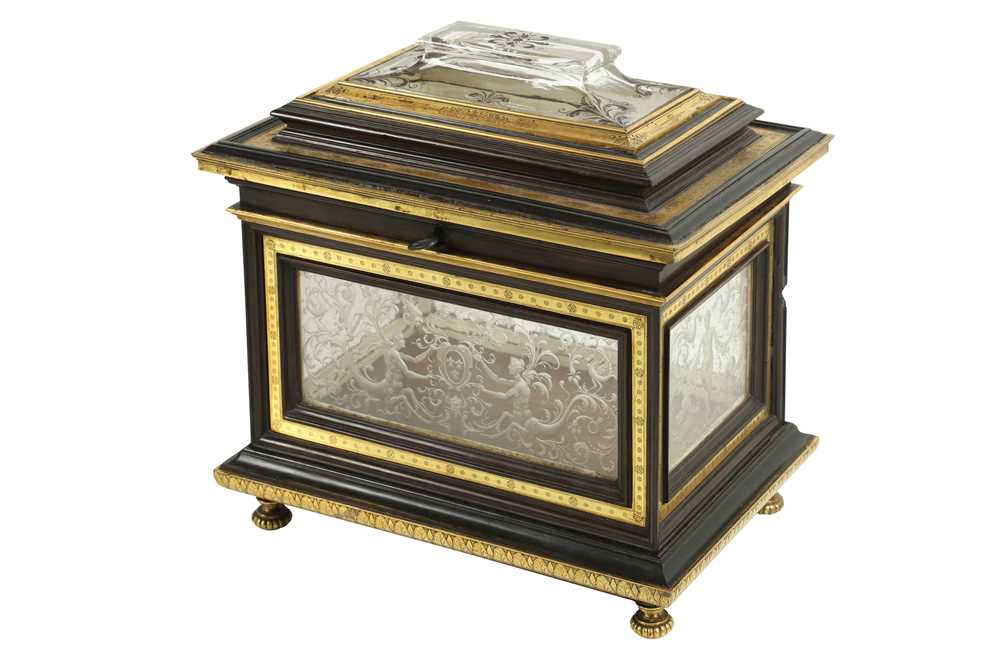 A FINE ITALIAN GILT BRONZE, EBONISED AND ROCK CRYSTAL CASKET WITH THE FARNESE COAT OF ARMS, PROBABLY ROMAN 19TH CENTURY, in the 16th century style of sarcophagus form, the lid with rock crystal atrium carved with scrolling foliage, flanked by gilt bronze mounts engraved with matching foliage, with ebonised mouldings and a further border engraved with flower heads, the panels of the casket decorated with anthropomorphic sea creatures their limbs terminating in scrolling foliage and various creatures, the front panel centred by a crest with the lilies of the Farnese coat of arms above a horned mask, the reverse centred by a twin handled urn, raised on four lobed ball feet, the hinged lid opening to reveal the interior lined with ivory panels, with key,
23cm high x 23cm wide x 16cm deep

This lot is subject to CITES due to the ivory.

Provenance: From a London private collector, acquired in Florence in the early 1990's from collector and connoisseur, Carlo de Carlo.

This precious casket, made from some of the the most expensive and highly prized materials available at the time, expresses the great wealth and status of its original owner. It is decorated with lillies which probably refer to Alessandro Farnese (1520-1589), 'the Great Cardinal', an important patron of the arts in 16th century Italy, and features rock crystal panels finely carved with Renaissance style motifs. The design is loosely based on that of the important Farnese Casket, by the Italian goldsmith Manno di Bastiano Sbarri (Italian, 1536-1576) who seems to have been a pupil of Cellini. Sbarri collaborated with Giovanni Bernardi, who carved the rock crystal panels as this was a highly specialised and difficult task. The Farnese casket is now in the Museo Nazionale di Capo di Monte.