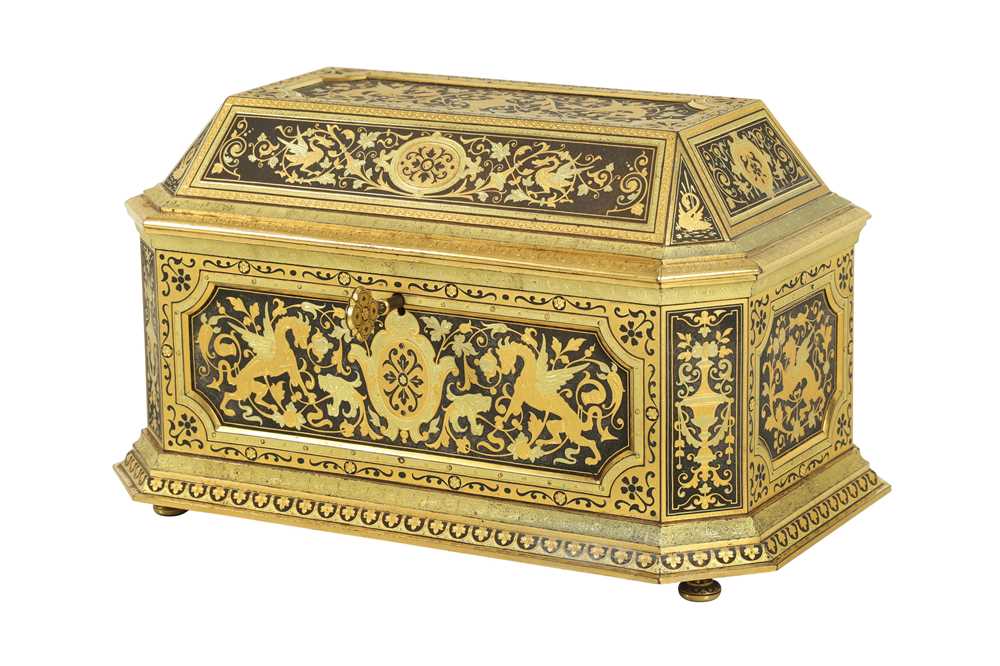 A FINE EARLY 20TH CENTURY SPANISH GOLD DAMASCENED STEEL CASKET IN THE MANNER OF ZULOAGA, of rectangular form with canted angles and sarcophagus shaped lid, on a plinth base and four bun feet, decorated throughout in chased two colour gold with cartouches flanked by dragons and griffins within foliate strapwork and arabesques, within borders of punched decoration of stylised flowerheads, a guilloche pattern and egg and dart, the canted angle panels with gilt swans on a black ground, the interior with red velvet lining, the inside edge silvered and engraved with inscription 'M. BERLSTAIN BARCELONA', the interior of the lid fitted with plaquette also with punched gilt decoration inscribed in gilt lettering on a black ground, 'AL COMANDANTE DE PINEDO GLI ITALIANI DI BARCELLONA 13 GIUGNO 1927.', complete with original key and in fine condition,

The Marquis of Pinedo referred to in the inscription on this casket was tragically killed in 1933 whilst attempting to fly from New York to Baghdad to beat the long distance record. His specially adapted aeroplane was carrying 1000 gallons of fuel when he lost control on the runway and his plane burst into flames. The whole incident was captured on film and can be viewed on the British Pathe website.

Placido Zuloaga (Spanish, 1834-1910) was famous for reinventing the technique of damascening. Based in Toledo, he exhibited his works at the 1855 Paris International Exposition (where he was awarded a Medal of Honour) and at the Madrid and Brussels International exhibitions of 1856, then at the Great London Exposition of 1862. From 1860 to 1890, Zuloaga trained more than 200 artists in damascening and the present casket is very likely to be by a follower of this great master, for the attention to detail and quality of the decoration can only be described as sublime. Zuloaga's work was so intricate that it would have been almost impossible to produce working alone, where as modern techniques use acid to etch metal, Zuloaga's delicate works were produced with hand tools, he therefore needed a whole team of specialist craftsmen working on his designs, and many of these fine objects were worked on by a number of different, highly trained artisans.