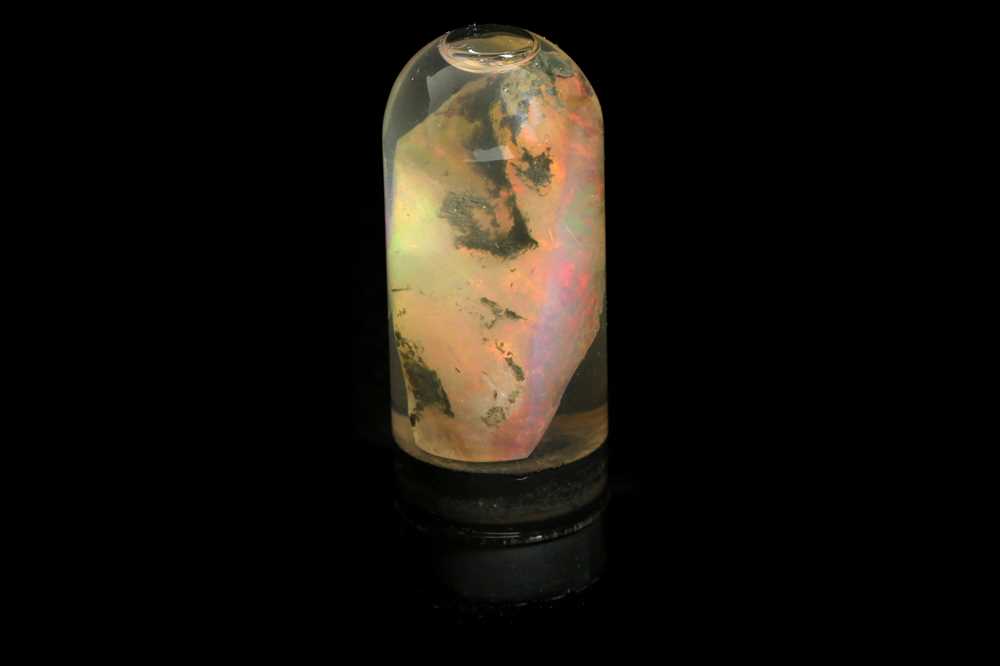 5.5cm in length, in a glass, water filled tube,

Notes: The replacement of carbon in wood by hydrated silica results in opalised wood replicas of the original structure. One of the best geologic environments for the formation of petrified wood is a forest buried by volcanic ashfall. The Virgin Valley in Nevada was formed 16 million years ago during a series of rhyolite volcanic flows resulting in a large basin enclosed by hills. A lake formed in the basin which deposited large amounts of diatomite, a form of silica. This dissolved silica precipitated into the cavities of wood left by the forests which had been buried in the basin resulting in the formation of opalised wood replicas. Most consist of common opal with no play of colour however this example exhibits a strong play of colour which suggests it is a much rarer precious opal example. Please note this sample has not been tested.

Provenance: The Museum of Curios, Cornwall.

The Museum of Curios collection was started in the 1930’s by Dr Palmer Ph.D. of Gloucester. Phillip Henry Douglas Palmer collected bizarre and wonderful artefacts all his life. He worked as an administrator for the National Health Service where he came into contact with many retired doctors and physicians. These encounters led him to amass a huge collection of eighteenth and nineteenth century anatomical models and curios from all over the world. Over the years he sold, swapped and dealt to collectors all over Europe increasing an already huge private collection of 2047 artefacts, which was housed in his small office at home in Downderry, Cornwall. Dr Palmer met Mr Robert Hudson in the early 1990's through his daughter Alison, and together they combined their collections and set up the Bizarre and Weird Museum in Newquay, Cornwall, which was to eventually hold some 4000 rare and unusual artefacts which were rotated for display. In 2006 the museum building was sold but a small number of artefacts remained in the collection, including this piece.