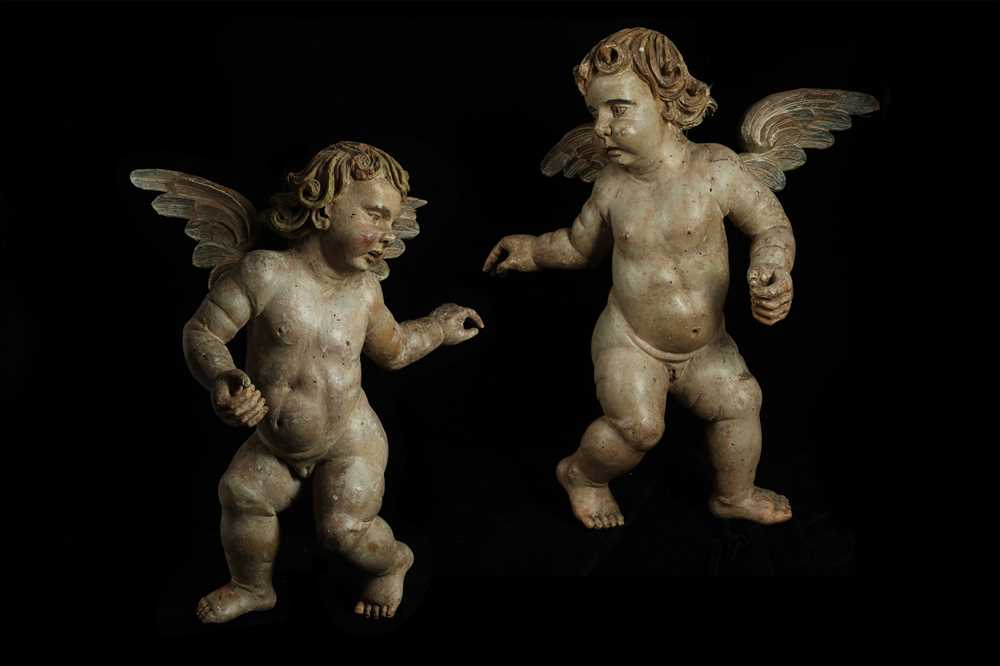 A PAIR OF LATE 17TH / EARLY 18TH CENTURY SOUTH GERMAN CARVED AND PAINTED WOOD PUTTI, each Baroque putto carved in limewood (lindenwood) and polychrome decorated, with expressive, chubby faces and softly curling hair, carved in the full round but with flat backs and separately applied wings,

The Baroque notion of putti as plump baby boys was derived from ancient Roman reliefs and statues, usually lightly clad or naked and often with wings, so that pagan images of Cupid could be confused with those of angels (cherubim). They were pioneered in early Renaissance art by Donatello, and became especially useful adjuncts in sculpture, where they performed supporting, mourning, or comforting roles on and around shrines, tabernacles and tombs. Such flying cherubim became one of the favourite motifs of the Baroque in Rome, often inspired by the need to lighten the sombre mood of images of cruel martyrdoms that were so emphasised in the imagery of the Counter-Reformation. Originated there by Algardi, Bernini and Duquesnoy, they rapidly became standard features in the repertory promulgated by their followers and throughout the 17th and 18th centuries. The present pair of putti were most likely part of a large decorative scheme around an altarpiece, gesturing towards a large painting or panel.