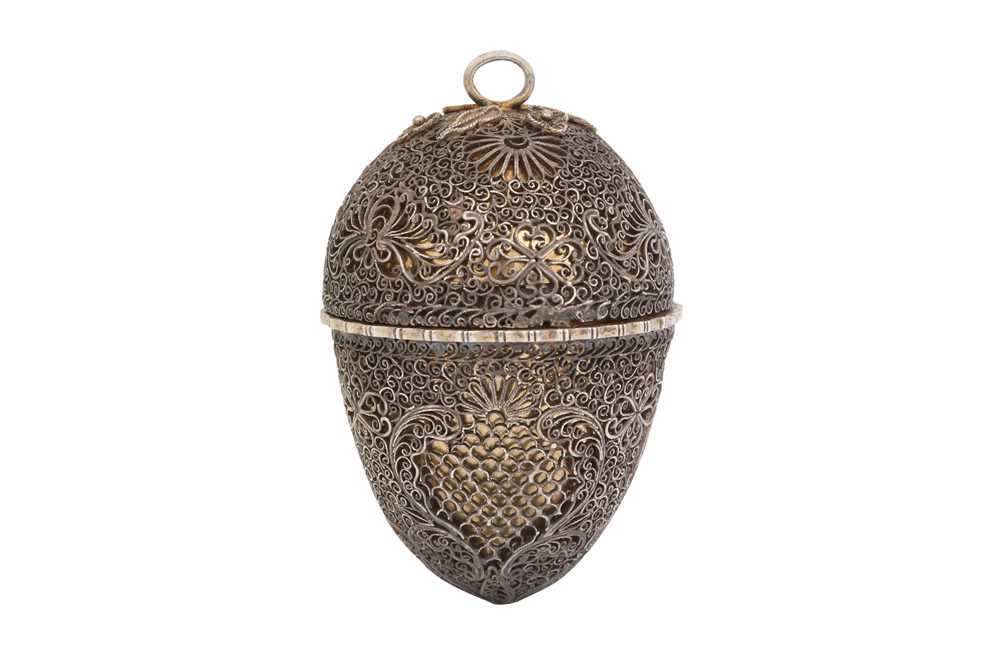 In the shape of an acorn, constructed in two halves with an inverted screwing mechanism, the exterior worked in fine filigree silver wire and decorated with cusped cartouches with fish-scale motifs against a ground of tightly coiled loops imitating scrolling vegetal meanders, and lobed rosettes, vegetal festoons, stylised arabesques, and sunburst roundels, the top with a suspension loop and applied silver rosettes with foliage, the thin sheets of silver on the interior gilt, 4.2cm long.

In the 16th and 17th centuries, Bezoar stones (natural gallstones of ruminants) and Goa stones, named after the location where they are believed to have been manufactured by Jesuits in the late 17th century, were among the most sought-after talismanic objects and eclectic 'exotica' pieces from India. Believed to possess extraordinary medicinal and prophylactic powers, rulers and potentates fearing death by poisoning from the Shahs of Persia to The Holy Roman Emperors would anxiously dip these stones in their drinks or directly ingest their scrapings.

By the end of the 17th century, genuine bezoars were being extremely scarce. It has been suggested that a group of Portuguese Jesuits living in Goa, eager to provide a supply to the vast demand, produced their own 'Goa' stones, a concoction of bezoar paste, clay silt, crushed shell, amber, musk, resin, narwhal tusk (believed to be unicorn horn), and crushed precious and semiprecious stones, all pressed into a ball and then gilt. The ornate gilt and silver-gilt containers for these stones were believed to enrich the medicinal effects of the stone and to enhance its supernatural powers, as explained in a letter by Filippo Sassetti, a Florentine merchant, written from Goa in 1580 (Nuno Vassallo e Silva, Exotica: The Portuguese Discoveries and the Renaissance Kunstkammer. Exhibition catalogue, Calouste Gulbenkian Foundation, 2001, no. 48., p. 152). For further information on Goa stones and their uses, please read or listen to the Metropolitan Museum of Art catalogue entry of a Goa stone and its gold case part of their collection: https://www.metmuseum.org/art/collection/search/454738 (last accessed 16/03/2022).