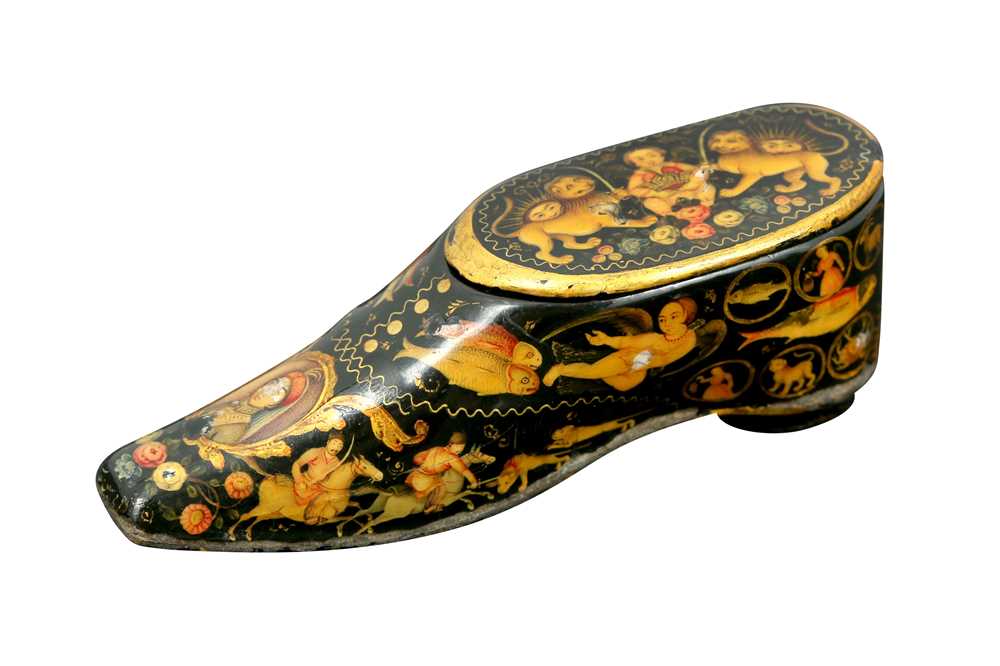 In the shape of a Qajar shoe, lacquered, polychrome-painted and heightened in gold, the finely painted box featuring a tour-de-force of figural decoration including the Twelve Signs of the Zodiac, winged cherubs and pairs of fish, and deer, lion and wild boar hunting scenes, the lid decorated with a winged angel in the centre holding the royal Persian crown and flanked by two lions holding swords (shir-o-shamshir), an anthropomorphised rising sun behind them, the scene a triumphant homage to the Qajar dynasty and its symbols, all against a black-painted ground, 3cm x 8cm.

The presence of several pairs of fish decorating this box and the fact that they are not bound to one of the Zodiac roundels but rather swim freely could possibly indicate that the box was commissioned as a present or yadgar (souvenir) to celebrate the Persian New Year (Nowruz), usually taking place on the 21st of March on the Spring Equinox day. In Persian culture, fish have both celestial, astrological and mythical importance being part of the creation myth. Given their relevance and auspicious connection to the beginning of the new Persian year, it shouldn't surprise that one of the main dishes served on Nowruz is Sabzi Polo Mahi (herbed rice with fish).