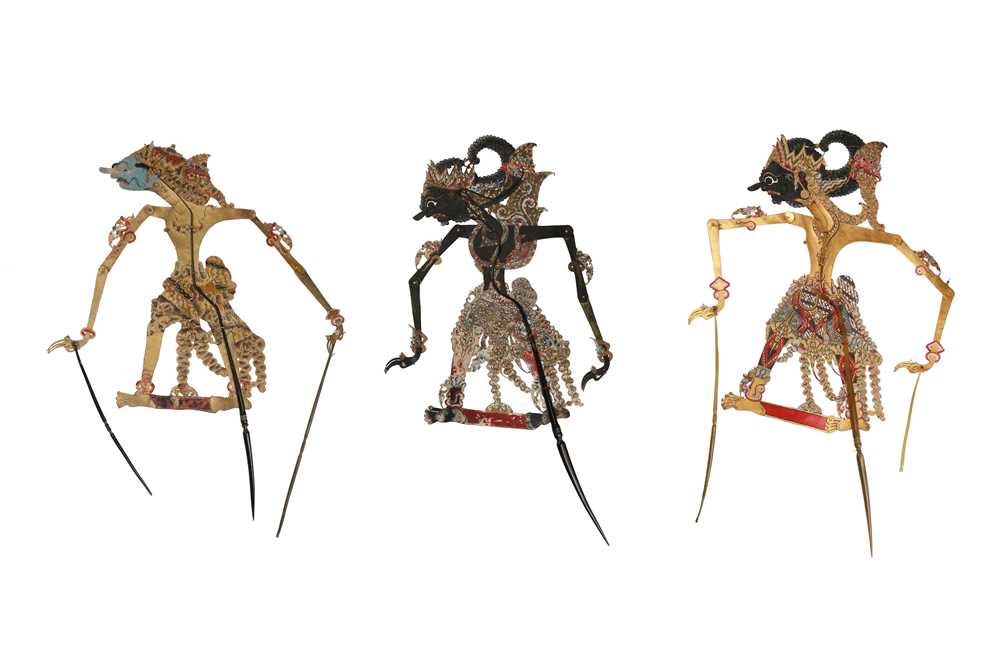 Comprising three wayang kulit (leather) puppets of traditional Javanese local epics and tales including three raden (king's sons or princes), possibly the blue-faced Raden Narayana (second child of King Basudewa from the Kingdom of Mandura, and also King Kresna when he was young); Raden Gandamana (the hero of the Javanese epic Gandamana Luweng and the younger brother of the King Drupada from the kingdom of Pancalaradya); and Raden Antareja (a great warrior, whose saliva was poisonous, son of Raden Bratasena, the second and strongest of the Pandhawa brothers in the Mahabharata epic, and Bathari Nagagini), each character designed in a stylised anthropomorphic shape, the body and movable arms made of leather, and painted with opaque pigments, white wash and gold, each puppet characterised by different adornments, accessories, hairstyle, attire, and physiognomy, their bodies and arms tied to buffalo horn tapering sticks, the longest 83.2cm.

Wayang kulit, probably the most renowned type of Indonesian wayang, refers to a genre of Javanese puppet theatre that is most frequently seen in Java in which the puppets are made of cut-out hide (kulit). The puppets' bodies are supported with carefully shaped buffalo horn handles and control rods, and painted in beautiful hues, including gold. The master puppeteer is called dhalang and his art is passed on from father to son, teacher to apprentice, and is taught in specialised secondary and tertiary institutions. The variety of puppets' characters is almost limitless, same as the repertoire of epics and tales that can be told, mixing local heroes and villains with other characters showing strong affinities with renowned Hindu epics like the Mahabharata and the Ramayana. For further research and information on this fascinating art and its creations, please read a very insightful paper on the topic by Joko Susilo, "Eisler Shadow-Puppet Collection Catalogue", 2004, Scholarship and Research. 1. (http://scarab.bates.edu/music_research/1, last accessed 16/03/2022).