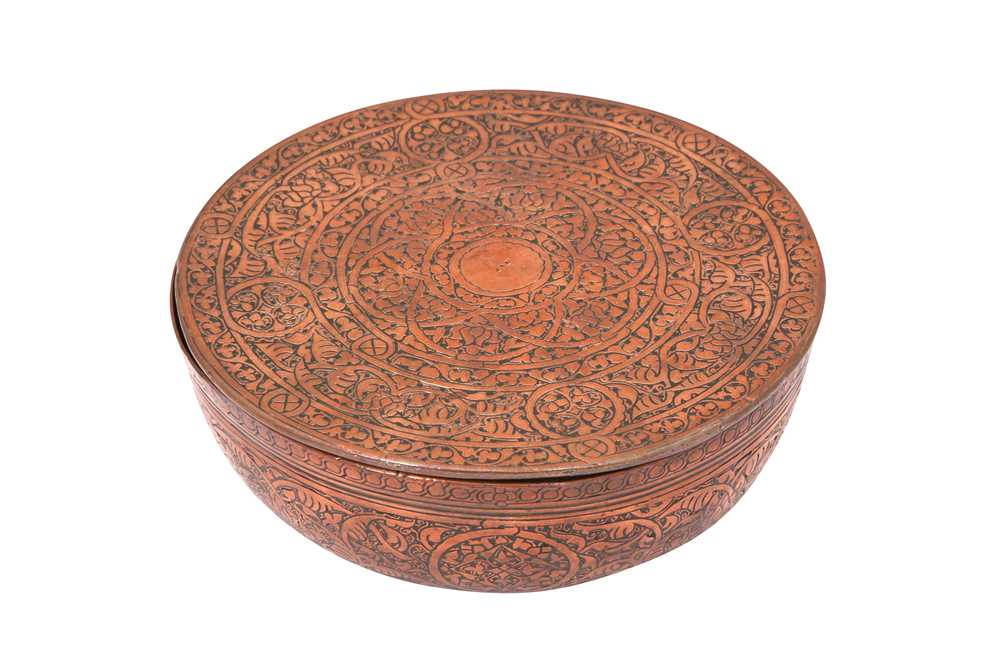 Of hemispherical shape, with a convex base and surmounted by a flat circular lid, the copper surface heavily engraved with typical motifs featured in the Veneto-Saracenic metalwork production, the lid and base repeating the same design with a large floral roundel in the centre, the circular medallion on the base engraved with a stylised fleur-de-lys, the central medallion on the lid plain, each petal of the floral roundel filled with foliage, vegetal decoration and lush lotus flowers, a band of vegetal scrollwork separating the main roundel from the external decorative band featuring fleshy lotus flowers with scrolling vegetal trellis alternating roundels of stylised arabesques in Western style and thick foliage, the interior plain and tinned, 14.5cm diam.

Veneto-Saracenic metals have intrigued scholars for many decades now. One of their most puzzling and elusive features is, perhaps, the attribution to their country of origin. Mamluk Egypt is usually indicated as the main country where these vessels would have been produced and exported to different lands, including the West. However, Syria and the Italian city of Venice have also been recognised as valid sites of production. The stylisation of the decoration and the lack of any evidence of silver inlay on our lot suggests a slightly later dating than other examples previously sold in these Rooms and a likely commission for export instead of local consumption.