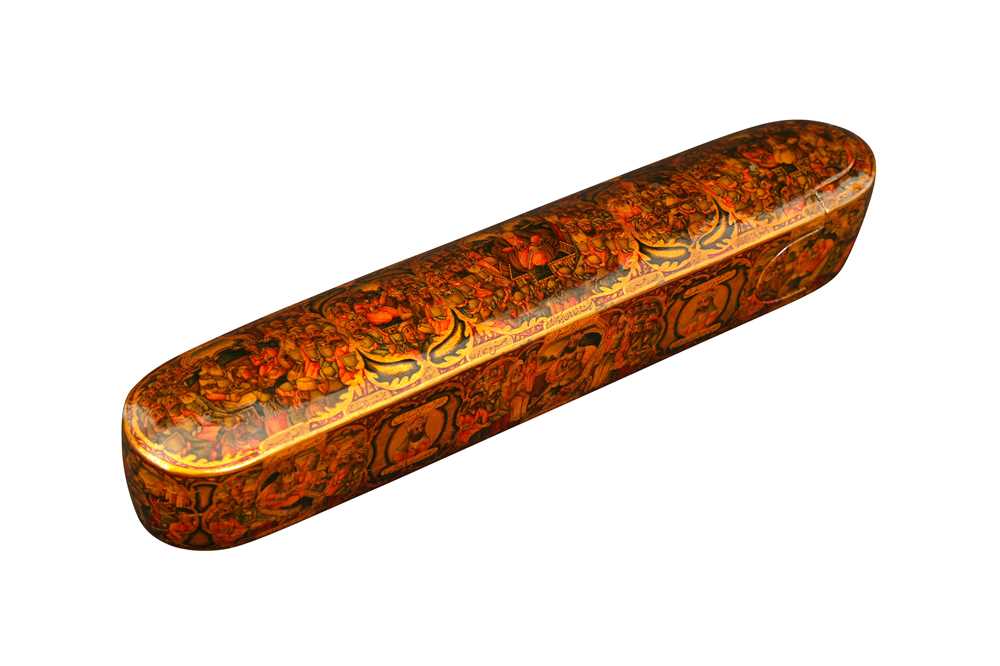 With rounded ends and sliding tray, lacquered, polychrome-painted and heightened in gold, the top, sides, and underside of the case and the sides and underside of the sliding tray an exquisite pictorial tour-de-force honouring the mythical kings of Iran in the Shahnameh like Jamshid, Kavus, Gayumars, Khosrow, and Bahram (on the exterior), and Persian poets, scholars and philosophers (on the interior), each panel painted with a horizontal composition consisting of multiple figural cartouches with dense group gatherings including enthronement scenes, courtly reunions, consultation and debates, diplomatic meetings with ambassadors, and several oval miniature portraits, each cartouche accompanied by black ink epigraphic captions providing context and details about the scenes, the base and sides of the sliding tray with cusped cartouches featuring philosophers, literati, Sufi sheykhs and pupils, and a woman on horseback clad with a burqa being reunited with her beloved, the interior of the tray painted in polychromes with rosette and flower bouquets against a gold ground, including its brass and silver dawat (inkwell), 22.5cm long.

This qalamdan is an exquisite example of the highly praised pictorial skills of Persian lacquer masters. The exterior showcases crowded enthronement scenes with all the most important mythical kings of Iran featured in the great epic Book of Kings (Shahnameh). The interior, instead, is finely decorated with portraits of poets, scholars, philosophers, and men of letters. The qalamdan could then be considered a tribute to the two souls of Persian culture: on one side, the great enlightened kings of the past, who ruled wisely, and were able to create a large, strong and healthy empire; and on the latter, the men of culture and letters, who imbued Persian society with fundamental values, ground-breaking ideas, and long-lasting cultural models.