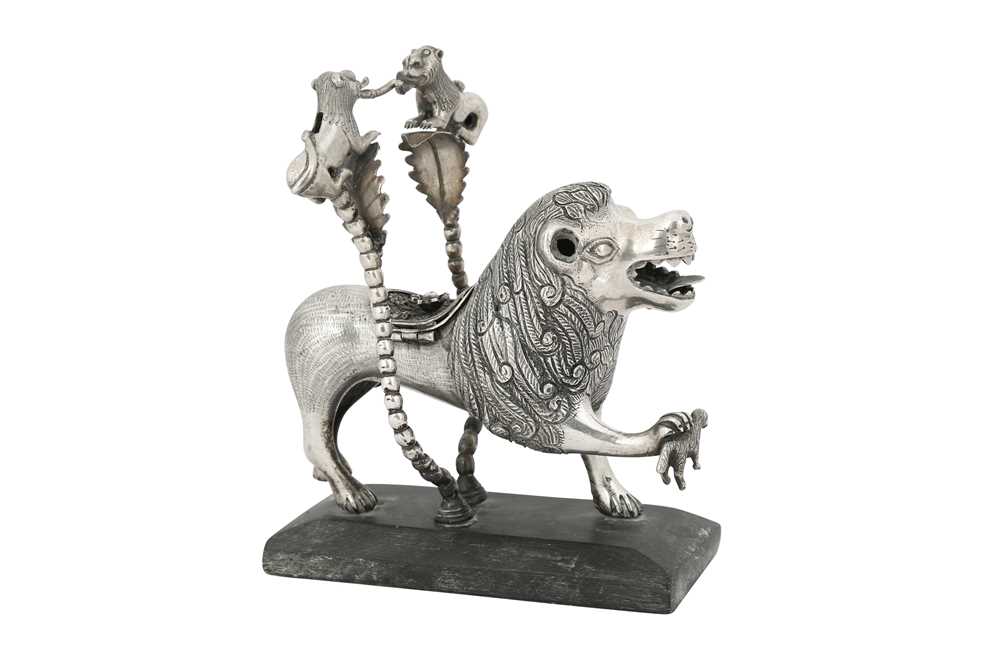 In the shape of a lion with its right foreleg raised and clenched to a miniature lamb, with a movable tongue pinned to the inner part of its fangs, on its back a circular opening covered by a silver filigree lid enhanced with floral motifs, flanked by two curved tall palm trees with large jagged leaves surmounted by a pair of small lions with long tongues and sticks coming out of their mouths, a small rectangular opening on each lion's backside, mounted on a later dark wood pedestal, 16.4cm x 15cm excluding the pedestal.

The function and precise attribution of this silver statuette are uncertain. The engravings on the lion's mane, snout and tail present a degree of similarity to lion sculptures produced in Rajasthan in the 19th and 20th century as decorative elements to royal silver thrones. For a visual reference to such thrones, please see Christie's London, 19 March 2008, lot 184, and 6 June 2017, lot 270. Silver, considered at once both pure and purifying, is mentioned in sacred Hindu texts as a suitable material for the thrones of rulers, and given its abundance in the Indian Subcontinent, these silver-clad thrones were reasonably easy to achieve.

However, the size of our statuette suggests a more plausible use as a finial, or perhaps as a decorative element to a palanquin or canopy. Our lot could be a possible precursor to the major sculptural elements added on 19th-century silver thrones. Moreover, there are several elements in our lion that could be described as naive, almost "caricatured", lacking the realism of some of the 19th and 20th-century Rajasthani silver creations. The deep engravings around the bulging almond-shaped eyes; the disproportionately minute paws compared to the very large head and mane of the main lion; and the large and protruding snout of all three lions: these all seem to be features linking the statuette to an earlier phase of production, when the iconography of the royal lion was not as standardised as later creations suggest.

That said, the symbolism of the lion is not only present on silver thrones and royal canopies; it permeates Indian culture in full and it goes all the way back to the first great Indian ruler, Ashoka, ruler of the Maurya Dynasty (r. 268 - 232 BCE), whose capital with four lions in Sarnath was adopted as the official emblem of India in 1950. Therefore, lions are very much part of the Indian artistic vocabulary and feature in the arts of India in a variety of media and forms across the centuries, from bronze incense burners, to large stone sculptural reliefs and capitals, from paintings to large architectural elements, often reproduced on the gates of royal palaces like in the case of the Mehrangarh Fort in Jodhpur, Rajasthan. One difference worth mentioning here though is the presence of the lamb in the lion's foreleg. The symbol of the lion and lamb is used in both Christianity and Judaism to represent the Messianic Age. Indeed, Christ is considered both the lion and the lamb of the Christian faith, as "He endured death as a lamb; he devoured it as a lion" (quote from St. Augustine, Sermon 375A). Thus, another plausible attribution for this lot could be a private commission from a Christian believer, for either the local or the export market.