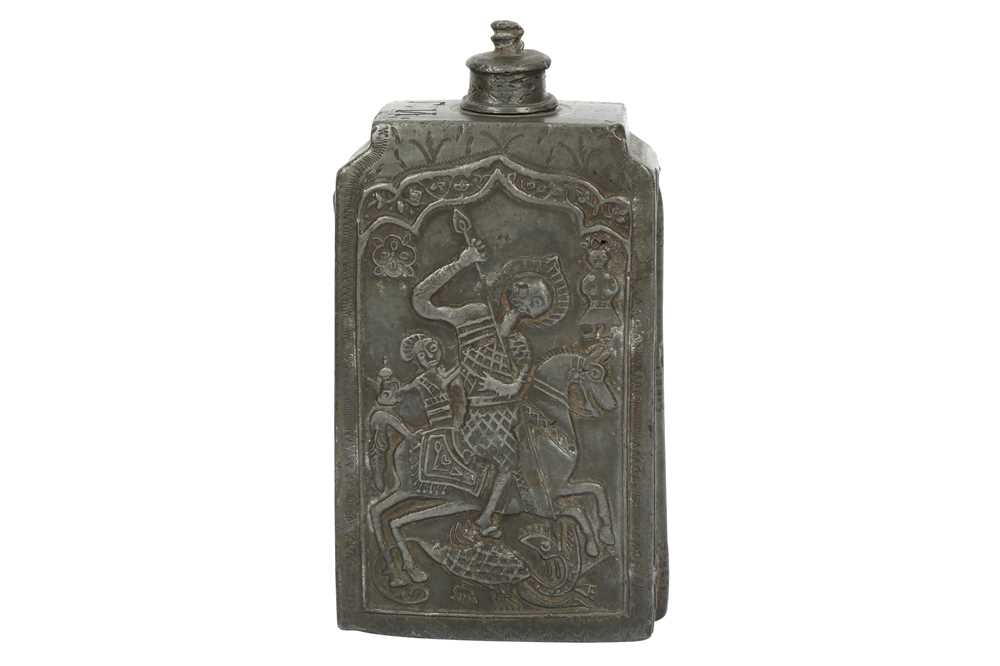 Of rectangular shape, resting on a flat base, rising to narrow stepped shoulders, with a screwed-in cylindrical stopper at the top and ridged short sides, the bottle possibly made of lead or pewter, decorated on the front and back with repoussé icons of St. George (Kevorkian) slaying the dragon, on one side the saint presented on his own with his name chased in relief at the top of the decoration, on the latter accompanied by a young page holding a typical Ottoman coffee pot behind him and the rescued princess in the background, both images set within cusped arches enhanced with vegetal festoons and fretwork bands similar to Armenian illuminated frontispiece in manuscripts, the sides with further vegetal scrollwork bands, the top later engraved with two Cyrillic Russian initials Г. И. (G. I.), 19cm x 9.5cm x 5cm.

The motif on this bottle mould is a very common one, dear to the Armenian community living in both the Western Anatolian and Caucasian territories. In the 18th century, the Armenian potters at Kutahya flourished, producing a wide range of vessels as well as pictorial and decorative tiles for the Armenian Cathedral of St. James in Jerusalem, dating to the first half of the 18th century. Several of these tiles depict the motif of St. George slaying the dragon and one, in particular, is dated 1168 AH (1718) (John Carswell, Kütahya Tiles and Pottery from the Armenian Cathedral of St. James, Jerusalem, vol. I, Oxford, 1972, tile CI, pl.10). It is likely to believe that as the potters' skill increased, they started moving from flat to three-dimensional figural representations, which in order to accomplish would have needed a mould such as ours. An example of a Kutahya flask with moulded panels depicting St. George was successfully sold at Christie's London, 25 April 2013, lot 254. For a comparison with a loose mould panel featuring the same scene, please see these Rooms, 25 October 2019, lot 202.