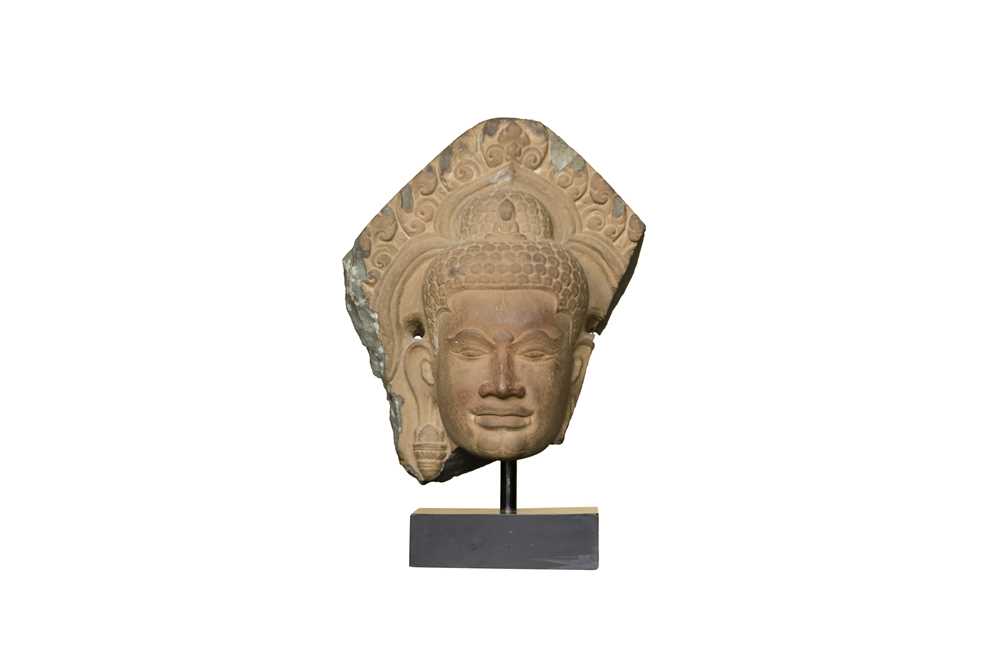 A KHMER CARVED BUFF SANDSTONE HEAD OF THE BODHISATTVA LOKESHVARA, THE LORD OF THE WORLD
PROPERTY FROM THE LATE JEAN-PIERRE YONAN COLLECTION
Cambodia, South East Asia, Angkor Wat style, circa 1100 - 1175

Carved on three sides with a flat back, possibly once attached to a stele or part of an architectural niche, the strict and yet elegant rounded face of the Bodhisattva Lokeshvara (Avalokiteshvara in Sanskrit and Guanyin in Chinese) realistically carved with the impression of the third eye on the forehead, further enhanced with arched eyebrows, almond-shaped eyes, a wide flattened nose, full, fleshy lips flanked on the lower part by small fangs, the cranial protuberance (ushnisha) covered with tight, rounded curls and at the top showing a miniature seated Amitabha in meditation, the Buddha of the West, of Eternal Life, and one of the five Cosmic Buddhas of Esoteric Buddhism, the elongated earlobes weighed down by heavy precious earrings, a reminder of his royal status (isvara - Lord, Ruler), the head surrounded by a cusped flaming halo, mounted on a black wooden stand, 43.4cm including the stand.

In the 12th and 13th centuries, with the rise of the Angkor Wat style (1100 - 1175) and the increasing importance acquired by secondary figures in the Buddhist Pantheon, the iconographic vocabulary of Khmer sculptures expanded to an unprecedented level. It is around this time that Bodhisattvas like Lokeshvara (or Avalokiteshvara in Sanskrit), Padmapani, and the female deity of Prajnaparamita (Tara) became more and more present in the repertoire of the religious arts of South East Asia, especially in Cambodia and Thailand.

Gilles Beguin explains this relevant transformation with the rise to power of the Mahayana Buddhist King Jayavarman VII (1181 – 1219), often considered by historians the most powerful of the Khmer monarchs and a devoted disciple of Buddhist teachings (Gilles Beguin, Buddhist Art: An Historical and Cultural Journey, 2009, pp. 150 - 154). Under his rule, Buddhism became the main state religion and the only path towards rebuilding a credible religious system after the catastrophic collapse set in place by previous rulers. Around the same time, sculptures of Avalokiteshvara / Lokeshvara started populating Khmer buildings, presented mostly in two forms with either a four-armed Lokeshvara with Buddha Amitabha seated in meditation in the front of his hairdo, each one of his arms carrying specific, identifiable attributes such as the padma (lotus), a rosary, a book and a flask of amrita (elixir); or a Lokeshvara whose body was fully covered with small icons of meditating Buddhas. Our lot is likely to have belonged to the first group.