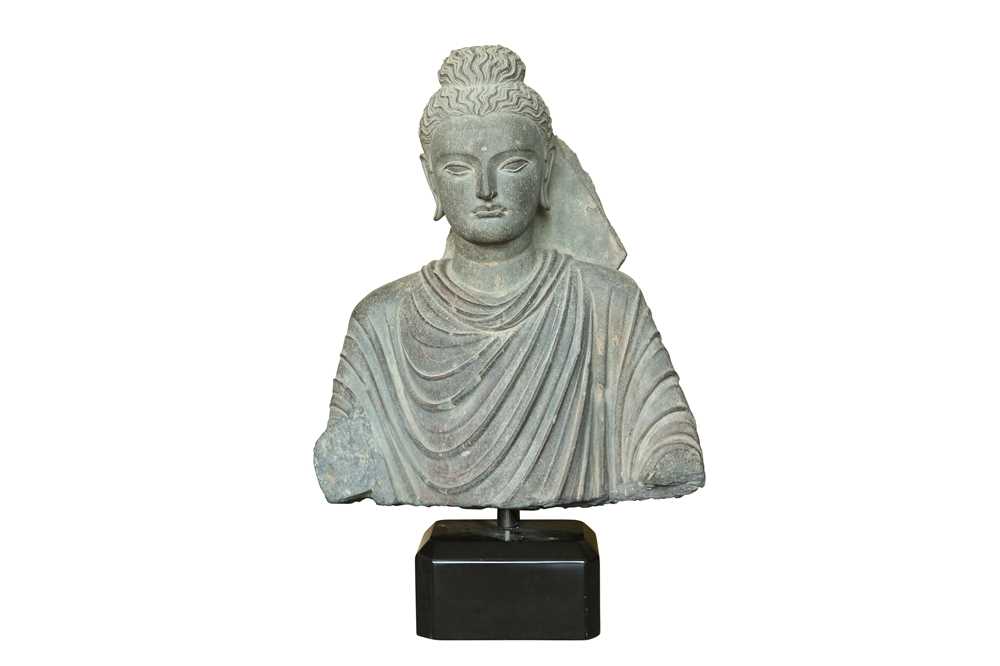 Carved on three sides, the back flat and plain, possibly once attached to a stele or part of an architectural niche, the Buddha's bust and shoulders covered in full by his monastic robe (sanghati) featuring many thick folds conveying to the plain cloak a classical Greco-Roman flare, the neck marked with several posture lines showcasing naturalism and realistic rendering, the elongated earlobes pierced, the Buddha's face characterised by a tranquil, timeless expression with arched eyebrows, heavy lids, wide almond-shaped eyes, tight full lips and straight nose, in the middle of his forehead a raised urna or Third Eye, his cranial protuberance (ushnisha) rendered with a large high bun pulling up thick wavy hair, behind his head a fragmentary halo, the bust mounted on a rectangular black stone base, 76.3cm high including the base.

From the first to the third century AD, the ancient region of Gandhara, roughly corresponding to modern-day north-western Pakistan, was under the control of the Kushan dynasty. Their kingdom was divided into two areas, Mathura in India, and Gandhara further to the West (Christian Luczanits in The Buddhist Heritage of Pakistan: Art of Gandhara, 2011, p. 13). Whilst the style of Mathura had a distinctive Indian flare and could be rightly considered the precursor of Gupta sculptural art, the stylistic rendering of the image of the Buddha in Gandharan art was the product of the aftermath of Alexander the Great’s campaigns yielding a unique fusion of Western art canons and Eastern religious and philosophical concepts.

This blend of Greco-Roman stylistic influences and Buddhist subjects led to a very prolific output of sculptures and figural panels mostly carved out of gray schist, the most readily available material in the region. Our lot presents several elements of the standardised sculptural canon of Gandharan art including the naturalistically rendered wavy hair, tied into a round topknot covering the Buddha’s cranial protuberance (ushnisha); the oval face with perfectly arched eyebrows, a straight Greek nose, full bow-shaped lips, and deeply cut, stylised eyes; and lastly, the heavy monastic robe (sanghati) with numerous deep pleats, reminiscent in style of a Roman toga. The halo at the back (now in a fragmentary state) and the dot in the middle of the forehead (urna) act as visual reminders that the figure we are looking at is the historical Buddha Siddhartha and not one of the many deities of the Greek Pantheon.

Although the production of Gandharan Buddhist reliefs and sculptures went in decline in the third century and completely ceased by the sixth century AD, the innovative artistic vocabulary introduced by this region’s creations provided the perfect platform for the development and evolution of Buddhist images, not only in India, but throughout the Asian continent (Ibidem, pp. 22-23).