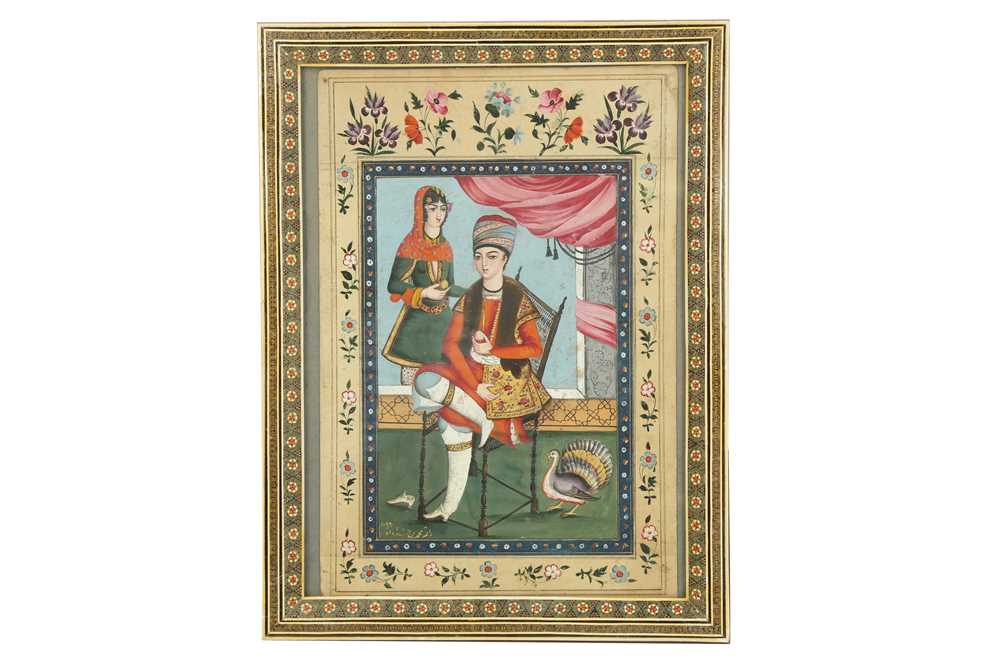 AN INTERIOR SCENE WITH A COUPLE AND A TURKEY
PROPERTY FROM AN IMPORTANT EUROPEAN PRIVATE COLLECTION
Iran, dated 1199 AH (1784 - 85), signed Muhammad ibn Khodadad

Opaque pigments, pencil and ink heightened in gold on paper, the vertical composition depicting an interior scene with a young nobleman seated on a Western high chair, wearing a multi-folded turban and a sleeveless, embroidered hunting coat lined with fur around the neckline following the typical Central Asian fashion canon already en vogue at the Mughal court introduced by the founder of the dynasty, Babur, his female counterpart wearing a long green kamiz over floral trousers and a bright orange headscarf, next to the nobleman and the chair a turkey, a rather exotic bird to have in a Persian interior, the composition set within concentric floral borders on dark blue and cream grounds, signed and dated in gold ink on the lower left corner Muhammad Ibn Khodadad 1199 AH, mounted, glazed and set in a khatamkari micro-mosaic frame with stellar and geometric motifs, the folio 28cm x 19cm, 33cm x 25cm including the frame.

In the majority of paintings from the Zand period (1751 - 1794), the most common and beloved subjects seem to be scenes of domesticity and romantic encounters (Layla Diba, Royal Persian Paintings: The Qajar Epoch 1785 - 1925, 1998, p. 148). These paintings act as photographs of the time, capturing relevant elements of the history, costume, social behaviours, and traditions of those years. Indeed, the outfit of our sitter provides a precious insight into the aesthetics of Zand fashion, his turban and sleeveless coat being the most recognisable and recurrent accessories in late 18th-century male portraits.

The painter Muhammad ibn Khodadad, active in the Zand period at about the same time of Muhammad Sadiq, was known for his bird studies and flower paintings, often painted in a style reminiscent of Safavid models. The choice of including a turkey in this domestic scene is rather unusual. North American turkey cocks (Meleagris gallopavo) were exotic birds that had to be imported from distant lands. No wonder that the Mughal emperor Jahangir (r. 1605-1627) requested his friend, the high-ranking noble Muqarrab Khan, procure him one. When the bird finally arrived in India in 1612, it caused such a sensation that the emperor ordered one of his best painters, Mansur, to draw it and include the accurate and realistic drawing in his Jahangirnama (please see the original album page in the Victoria and Albert Museum Collection, acc. no. IM.135-1921). Thus, the choice of the painter to draw such a rare animal in this painting could lead to two possible explanations: either the sitter was a member of the Zand court and his high-ranking status granted him access to exotic animals and rare delicacies, or the painter wanted to flaunt his skills in drawing a bird he was unlikely to have seen up close in real life.