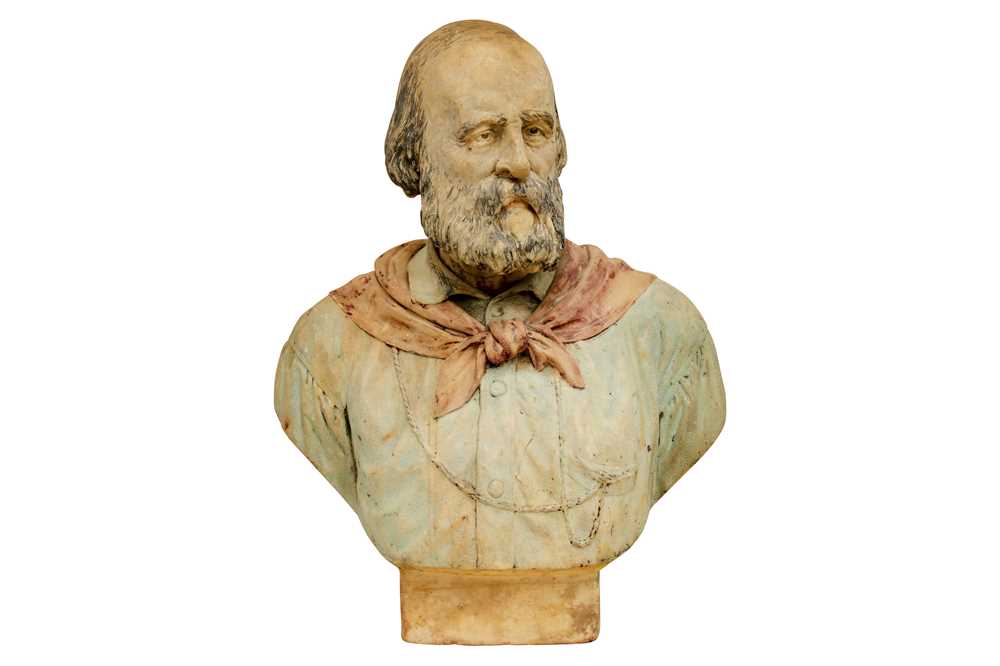 AMENDED - A LATE 19TH CENTURY ITALIAN TINTED MARBLE PORTRAIT BUST OF GIUSEPPE GARIBALDI (ITALIAN 1807 - 1882), circa 1875-95, modelled in later life with full hair and beard tinted dark brown/black, he wears his uniform of a blue tinted jacket with a synonymous red tinted shirt/cravat tied around his neck and shoulders, a watch chain hangs across his chest to his top pocket, on square base, the back signed indistinctly, possibly the initial 'G' with a three/four digit number below, 73cm high, 42cm wide, 38cm deep

This bust closely matches the white marble portrait bust of Garibaldi in the collection of the Museo del Risorgimento in Milan by Giovanni Spertini, which was sculpted from life and dated 1875.

Giuseppe Maria Garibaldi was born on 4th July 1807 in Nice, which was then part of the French Empire. He became an Italian patriot and soldier of the Risorgimento, Italian for ‘Rising Again’, a 19th century movement for Italian unification that culminated in the establishment of the Kingdom of Italy in 1861. He was a republican who, through his conquest of Sicily and Naples with his guerrilla Redshirts, contributed to the achievement of Italian unification under the Royal House of Savoy. He is considered to be one of the greatest generals of modern times and one of Italy's ‘fathers of the fatherland’, along with Camillo Benso, Count of Cavour, Victor Emmanuel II of Italy and Giuseppe Mazzini. He died on 2nd June 1882 in Caprera, Italy.