On Paper | Five Centuries of Master Drawings and Prints 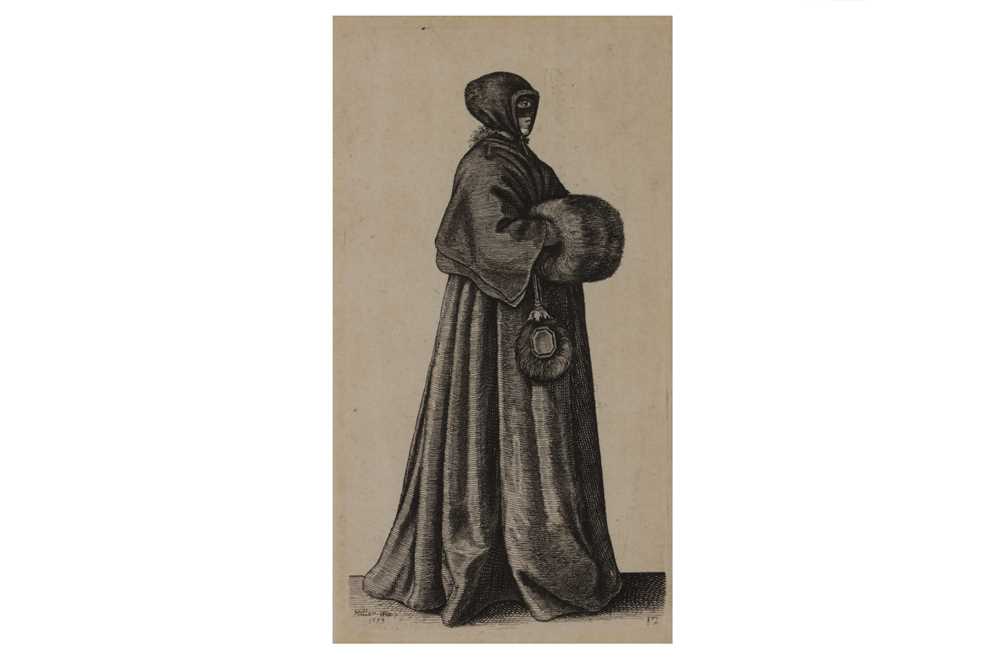 WENZEL HOLLAR (PRAGUE 1607 - 1677 LONDON)
Woman with mask, hood and muff from The several habits of English women, from the nobility to the country women as they are in these times, 1639
etching on paper
104 x 73 mm (plate: measured in frame)
framed

Prague-born Wenceslaus Hollar, better known as Wenzel Hollar, was a prominent graphic artist of the seventeenth century who lived the majority of his life in England. The present work is taken from a large collection of costume prints depicting mid-seventeenth century English women’s fashion. The etched figure wears a visard, an item initially pioneered by travelling women in the sixteenth century to maintain their fashionably pale complexion. Such visors were often made of velvet and typically covered the entire face, both muting the wearer and concealing her modesty. The seventeenth-century variation, as depicted here, covers the upper half of the face and was a common winter accessory worn by affluent women in London. Alongside the mask, the work contains the notable hallmarks of Hollar’s costume collection: a full-length view, a Chapperon hood, a fur muff and a half-face mask.

The mask’s coquettish concealment of feminine beauty was oft remarked upon in contemporary literature:

Her maske so hinders mee
I cannot see her beauties deitie.
Now that is off, shee is so vizarded,
So steep'd in Lemons-iuyce, so surphuled
I cannot see her face, vnder one hood
Too faces, but I neuer vnderstood
Or saw, one face vnder two hoods till now,
Tis the right semblance of old Ianus brow.
Her mask, her vizard, her loose-hanging gowne
For her loose lying body, her bright spangled crown
Her long slit sleeue, stiffe busk, puffe verdingall,
Is all that makes her thus angelicall.

This excerpt is taken from John Marston’s 1598, ‘The Scovrge of Villanie: Three books of satyres’.

We wish to thank Emma Arrindell for her assistance in cataloguing this lot.