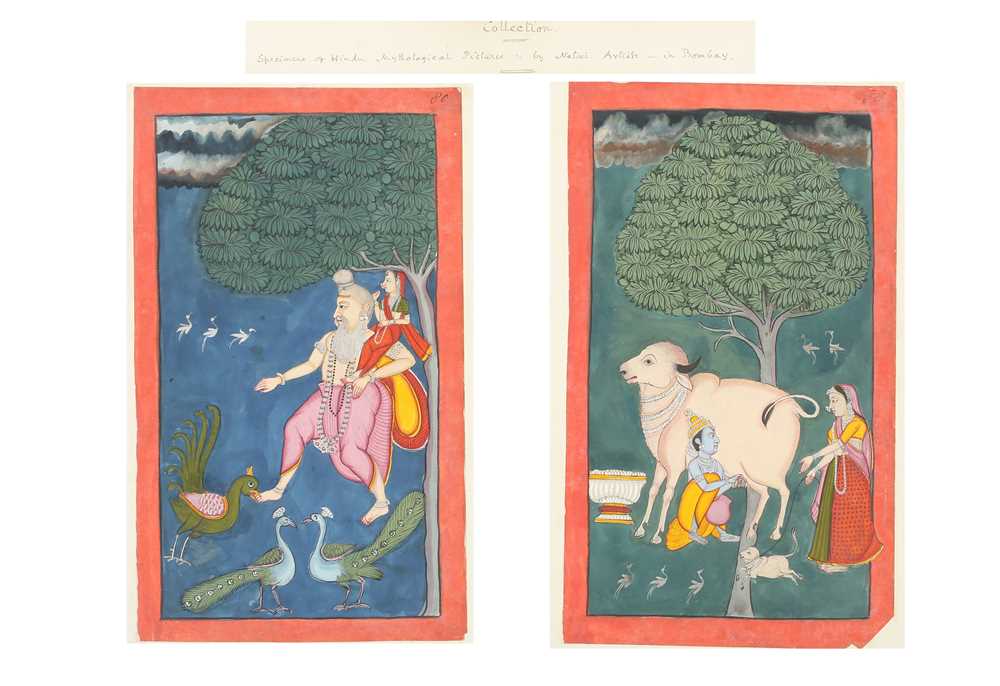 Opaque pigments on laid paper, comprising two depictions of the Hindu God Krishna, one of the main avatars of Vishnu, in the vertical composition Krishna milking a cow in his home village of Govardhan, a gopi approaching him with a calf, 32.7cm x 19cm, and in the horizontal composition Krishna slaying the Crane Demon Bakasura, Krishna's brother Baladeva standing next to him in a posture suggesting he is attempting to run away from danger, 19.5cm x 33cm; and a third watercolour in a similar style to the first, with a Shaivite sadhu wearing a long floral garland and a rudraksha rosary bead necklace, a small female figure, possibly a deity, on his shoulder, his forehead marked with the Shaivite tilaka or tripundra (three horizontal lines), his right foot being pecked by a long-tailed green bird, possibly a rooster or a stylised Hamsa duck, a pair of peacocks in the foreground, 32.5cm x 19cm, each watercolour marked with a Western numeral in sepia ink (9?, 80 and 83), all pasted onto the same large sheet of laid white paper bearing the series numerals 133/5 and 133/6, and notes in sepia ink reading Collection - Specimens of Hindu Mythological Pictures by Native Artists in Bombay on both sides.

Provenance: Reeman Dansie Auctioneers, 20 June 2017, lot 902, from the collection of Edward Moor (1771 - 1848), a British soldier for the East India Company during the late 18th century and one of the first great British Indologists, renowned for his first publication, The Hindu Pantheon (1810), an early treatment in the English language of Hinduism as a religion.

This publication is an emblem of the Enlightenment concept of education of foreign cultures and religions. It sought to eradicate the Western misconception that Hinduism was a primitive pagan religion and wanted to provide the British audience with a better, more culturally sensitive understanding of Indian traditions, practices and beliefs. Moor's research and many of the illustrations in his book, some engraved by William Blake, were based on the large collection of small devotional bronzes and Rajput paintings of deities that he collected while based in India. Most of the paintings and artifacts in his collection were later bequeathed to the British Museum by Mrs. A. G. Moor in 1940 and are still today part of the Museum's permanent collection (https://www.britishmuseum.org/collection/term/BIOG12542).