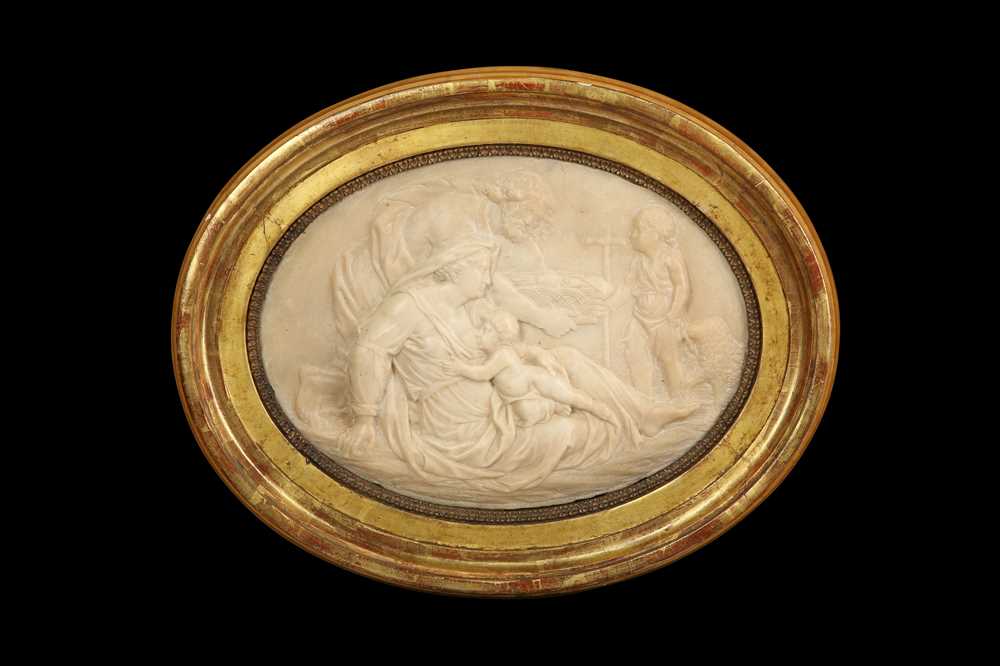 Click for high resolution
FRANCO-FLEMISH, c.1640, PERHAPS BY THE YOUNG GERARD VAN OPSTAL (1605-1668): AN OVAL MARBLE RELIEF OF THE VIRGIN SUCKLING THE CHILD attended by Joseph and the infant St john the Baptist, with his reed-cross and symbolic lamb, mounted in a later oval giltwood frame, the marble 30cm wide x 22cm high  With thanks to Dr Charles Avery for his assistance with cataloguing this lot. COMPARATIVE LITERATURE: G. Bresc-Bautier /I. Leroy-Jay Lemaistre/Guilhem Scherf,  Musée du Louvre, Département des Sculptures…, Sculpture française II – Renaissance et Temps Modernes, vol 2 Goujon – Warin, Paris, 1998, p. 605, MR 2771, marble relief, 37.5 x 55.5cm – ‘La Vierge allaitant l’Enfant adoré par des anges’. The date of Van Opstal's birth in Brussels has recently been established as 1605, rather than c. 1594.  He trained in his native city under Nicolas Diedon, but matriculated into the Guild of St Luke in Antwerp in 1635-6, where he seems to have concentrated on carving in ivory.  In 1643 he moved to Paris and embarked instead on a career as a marble and alabaster carver, producing decorative reliefs for many buildings, including the Palais du Louvre (under Sarrazin) and the Hotel Carnavalet (1655-61). He also worked in terracotta and bronze. In 1648 he was one of the twelve founding members of the Académie royale de peinture et sculpture and was appointed 'sculpteur ordinaire du roi'.  His style is indebted on the one hand to ancient Roman sarcophagi and Renaissance reliefs, but on the other to his fellow-countrymen, the sculptor François Duquesnoy and the painter Rubens, who were helping to create the Baroque style in Rome and in Flanders. Nearly twenty bas-reliefs in marble were recorded first in Van Opstal's posthumous inventory of 1668, then in the Cabinet des Dessins du Roi (Louis XIV), and finally in the Musée du Louvre. Of these, one depicting The Virgin suckling the Child adored by Angels (MR 2771) seems to be a re-working of, or to have been inspired by, the present, more tentative, composition.  There, the Virgin is enthroned on a classical architectural podium, holding the child comfortably in the crook of her proper left arm as He suckles at her breast: here she is a Virgin of Humility, seated on the rocky ground (as in a typical Rest on the Flight into Egypt), supporting her weight by propping her right arm behind her, while Joseph attends her with a wicker basket laden with ripe fruit – perhaps large, luscious dates (as again was traditional in that scene, though there is no sign of the palm-tree from which angels shook them down).  There, the infant St John reaches up at her knees and passes to her the scroll with his famous later prophecy, ‘Behold the Lamb of God,..’. Here, the classical profile of the Virgin’s cowled head and the play of drapery carefully arranged to reveal her limbs beneath it are reminiscent of the work of the sculptor François Duquesnoy (mentioned above), while the frizzy hair and beard of Joseph seem to show the beginnings of Van Opstal’s characteristic treatment of hair as a windswept mass. Alternatively, the present scene may instead be derived from Van Opstal’s similar, adult work in the Louvre by a gifted assistant within his workshop, for the relief described above remained there until it was acquired by the King, and so was probably not disseminated further afield.