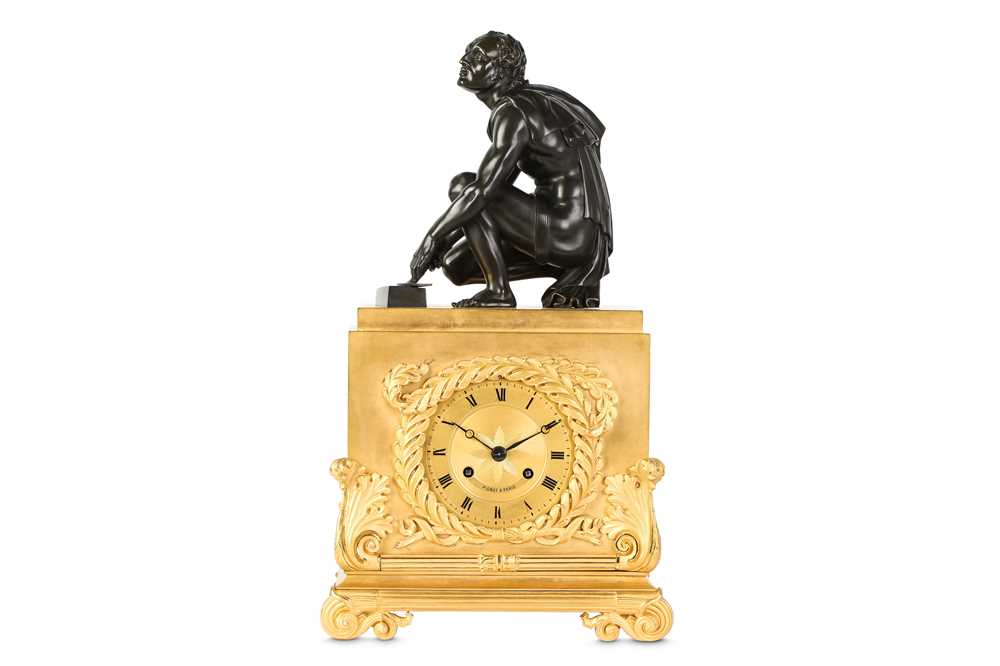 A FINE EARLY 19TH CENTURY FRENCH GILT AND PATINATED BRONZE FIGURAL MANTEL CLOCK DEPICTING THE ARROTINO BY PIGNOT AND PONS, PARIS' the bronze figure of the Arrotino (knife grinder) raised on the gilt bronze plinth case decorated with scrolling foliate mounts and a laurel leaf cast bezel, enclosing the Roman dial with engraved star to the centre, with Brequet type hands, signed 'PIGNOT A PARIS', the twin train movement signed 'ADRE PIGNOT A PARIS', and 'Pons MEDAILLE D'OR 1827', with outside countwheel striking on a bell, with silk suspension and pendulum, 45cm high  The fine quality bronze figure mounted on the present clock is a reduction of Giovanni-Battista Foggini's Arrotino, itself a copy of the Roman original. Foggini was commissioned to produce a large carved marble figure of the Arrotino as a pendant to Coysevox's 'Crouching Venus', by Louis XIV for the Parterre Nord at Versailles in 1648. These large marble versions are now in the Louvre (inv. no. MR 1826; inv. no. MR 1853). The Arrotino was one of the most celebrated sculptures of antiquity throughout the 17th, 18th and 19th century, and was presumed to depict the Scythian executioner whetting his blade, before the legendary flaying of Marsyas.  Honore Pons was the son of an instrument maker but trained as watchmaker, and established his own premises in 1803. He built a reputation as a fine horologist and worked with the French Minister for the Interior to help to re-establish the watchmaking industry in France; he was also awarded several medals including the Medaille d'Or in 1827. The present clock can be dated to between 1827 and 1834, as Pons used the 1827 Paris Medaille d'Or stamp until 1834, when he won the gold medal again. A fine automaton clock by Honore Pons with the same 1827 stamp was sold in these rooms on 24th May 2017, lot 132, £5000