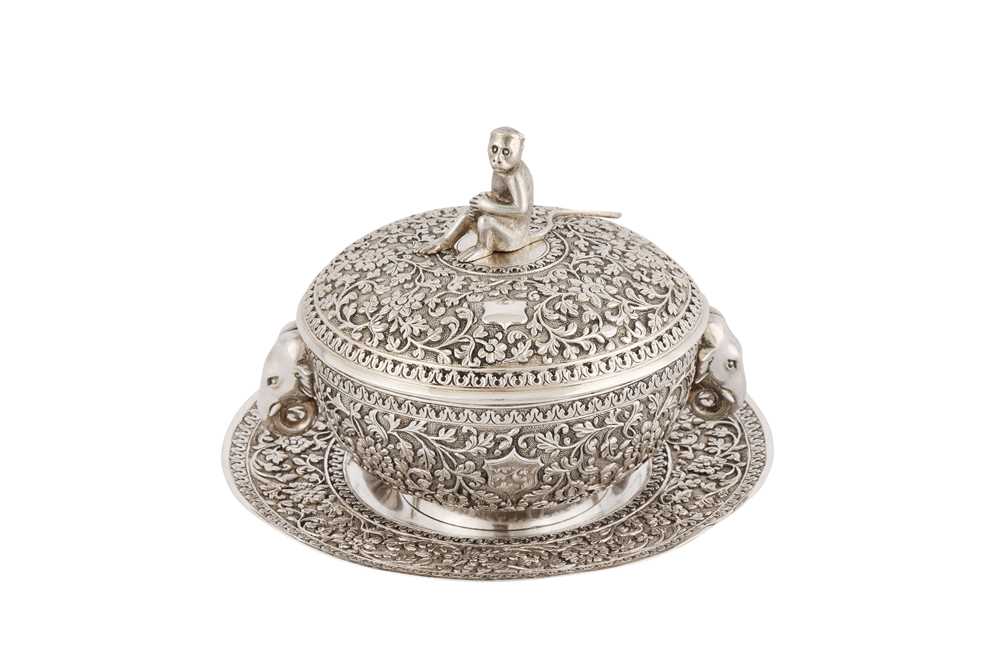 Raj period. The dish of hemispherical form upon a collet foot, with cast and applied twin handles formed as elephant’s heads. The domed pull off lid surmounted by a detachable cast finial formed as a sitting monkey with tail behind, a Bonnet macaque holding a mango. The stand of circular form with a broad rim. Chased decoration of foliate scrolls and rosettes, between borders of stylised acanthus leaves. The lid and the base with a vacant shield shape cartouche. Fitted with a removable blue glass liner. Traces of gilding. (3)

Of all the Indian silver producing artisans in India, one name stands out as associated with pieces of the very finest quality: Oomersi Mawji. Pieces by this accomplished master began to appear circa 1860 and they continued to be produced by his sons and grandsons will into the twentieth century.

There is no doubt that Oomersi Mawji was one of the most gifted silversmiths working anywhere in the world during his lifetime. His understanding of form, proportion and decoration, his willingness to devote extra labour to a piece to truly perfect it to world-class standards, and his use of an extremely high grade of silver (often 98 per cent pure) combine to lend even the most mundane objects an aura of grandeur, placing this artist in the ranks of the finest craftsmen. The standards of quality, workmanship, and design, often enhanced with a little humour (the monkey finial in this instance) were passed to the artist’s progeny and characterise their work as well.

With its sensuous forms and intricate ornament, the work of Oomersi Mawji has enormous appeal. Every painstaking detail covering almost the whole surface of each object is an element drawn from nature. Sinuous plants coil and wind in infinite undulating, swirling patterns through which emerge stylised poppies, which curl and twist to reveal every stage of flowering.

The dish and stand showcased here serves to illustrate many of the characteristics of the best Cutch workmanship. Here, the fine casting of the elephant head handles, whose incorporation into the design empathises the three-dimensional aspect of the decoration of this piece. The rather bored looking monkey finial only adds to its visual appeal.