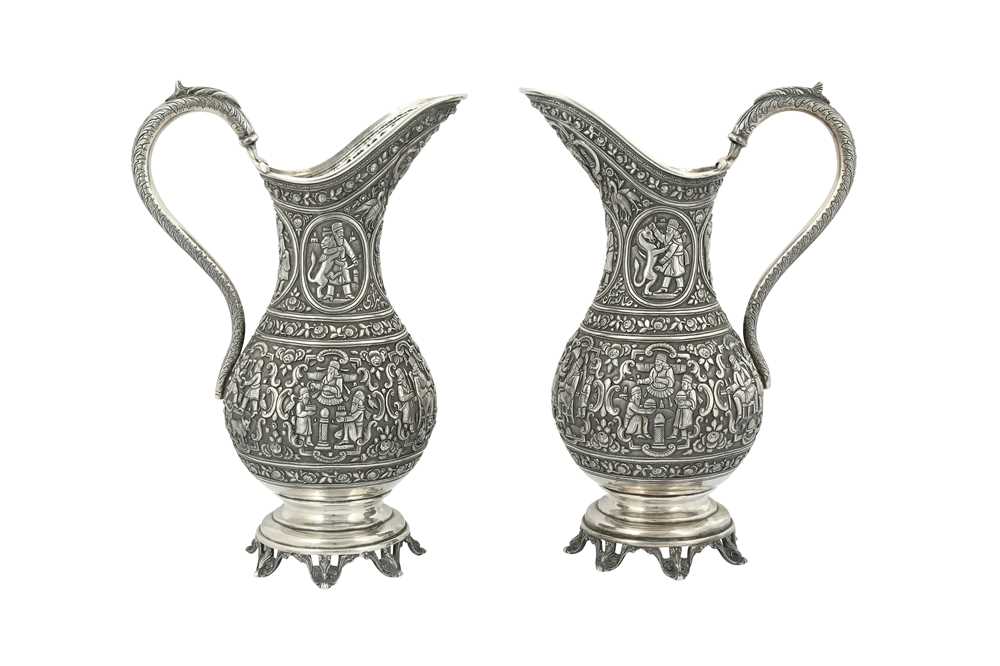 Each of pyriform shape, resting on a stepped circular base raised on seven protruding feet in the shape of fleshy palmette leaves, rising to a flared cylindrical neck with a wide, everted spout, an S-shaped handle on one side, the exterior clad in fine repoussé decoration consisting of two main registers with lobed and oval Achaemenid-revival figural cartouches amidst rosette bunches and foliage, each vase signed The Making of Mohammad Isma'il Shirazi 1317 AH (1899), each 32cm high and 1300gr.

The repoussé figural decoration on the pair's exterior illustrates several scenes inspired by Persia's glorious past and the artistic tradition of ancient rock carvings of the Fars region. The lobed cartouches around the body showcase the primary tasks and correct behaviours of the rightful ruler, including scenes of fair government, punishment of misconduct, investment with the khvarenah (the divine empowerment of kings conferred by Ahura Mazda, the Supreme God of the Zoroastrian faith), and diplomatic encounters with foreign ambassadors. Around the neck, the oval medallions highlight the prowess and strength of the Achaemenid rulers following an iconographic vocabulary not dissimilar from the Greek Twelve Labours of Heracles, e.g. slaying chimaeras, lions and other fierce beasts. The iconographic programme of these vases is perfectly in tune with the late 19th-century Iranian royal gusto for artworks that boast about the past of Persia and the invincible nature of Achaemenid rulers.