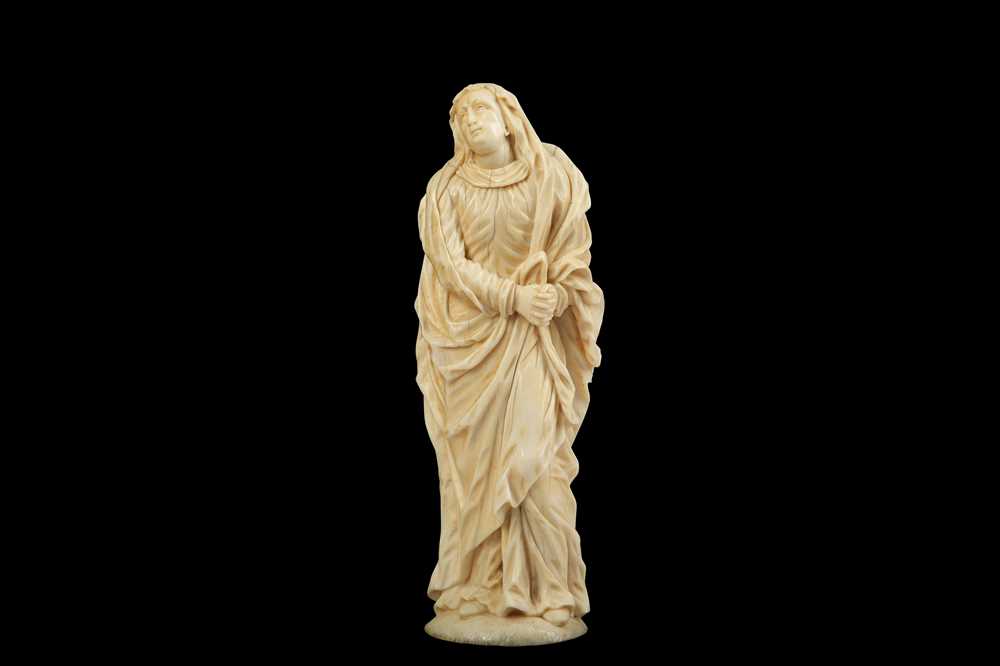 Click for high resolution
CIRCLE OF CHRISTOPH DANIEL SCHENK (GERMAN, 1633-1691) : A FINE IVORY FIGURE OF THE MOURNING VIRGIN her face upturned and eyes open, her hands clasped in prayer, her voluminous drapery revealing the tips of her toes on the demi-lune integral base, 26cm high Related Literature: R. Randall, Jr. 'Masterpieces of Ivory', Sotheby's Publications, 1985, p.252, no. 382 for a comparable 17th century South German ivory mourning Virgin. Museum Comparables: Walters Art Gallery, Baltimore, Inv. no. 71.471 Auction Comparables: Sotheby's London, 5 July, 2016, lot 121, a carved wood crucifixion group also attributed to circle of Schenk which features a very similar figure of the Virgin Mourning. This intricately carved figure can be attributed to the circle of Schenk based on the tightly clamped and finely carved hands which are typical of Schenck and his followers, the voluminous drapery with numerous folds and ripples as well as the almost S shaped pose of the Virgin are features of German carving in the second half of the 17th century. Christoph Daniel Schenck produced mainly religious sculpture, from large scale wooden altarpieces to small devotional figures in ivory similar to the present lot. He was known for exploring themes of suffering and penance through his art, and using the drapery of his figures to express heightened emotion. This lot is subject to CITES.