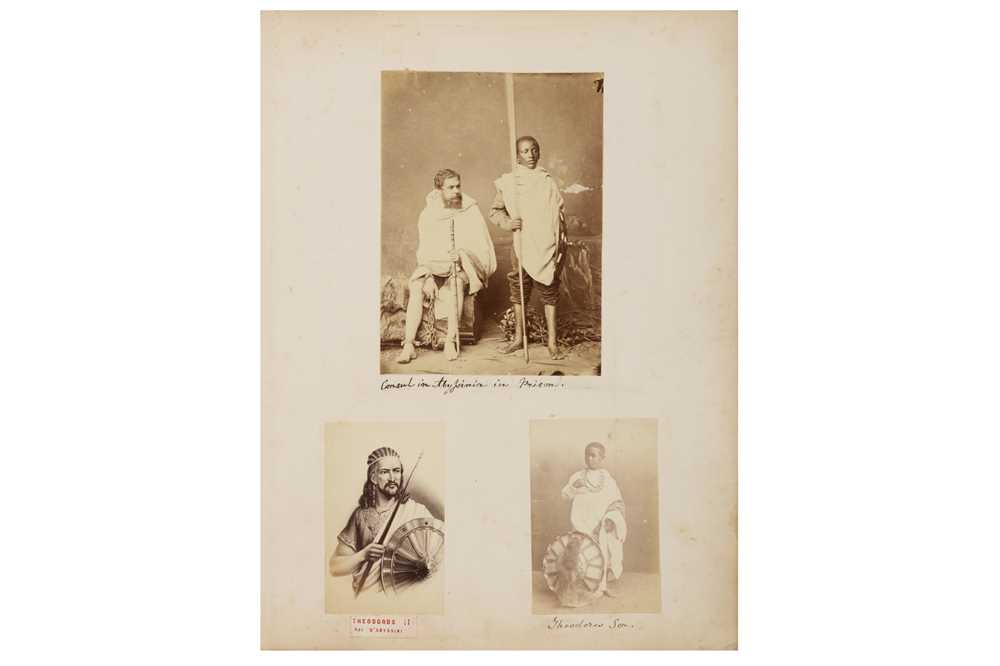 CONSUL IN ABYSSINIA IN PRISON c.1868 [Captain Charles Duncan (1825-1870), Albumen print, pasted onto contemporary paper support, image size,140 x 102mm, posed as a captive in chains, with his ‘guard’ standing to his left holding a spear and a shield

Following on from his father’s defeat and death, Prince “Alamayou was orphaned when his mother died during the trip to the coast, the British forces had intended to take them both to Britain but Alamayou travelled alone. He was introduced to Queen Victoria at her Isle of Wight residence, Osbourne House. He was educated at Rugby and Sandhurst where he was deeply unhappy possibly due to the racism that he encountered. He moved to Far Headingley, Leeds, to stay with his old tutor Cyril Ransome but contracted pleurisy and died of the illness 6 weeks later.”

“Ruler, born in Qwara district of Dembia, a region of Beghemider province in Ethiopia. He was born Kassa Hailu and took the throne name Tewodros II at his coronation in 1855. He took his own life at Maqdala, his hilltop fortress, after defeat by the British forces led by Lord Napier in 1868.” (British Museum). The actions which precipitated the British invasion included the capture and imprisonmemnt of Consul Charles Duncan and a number of other British and European individuals..