A SET OF THREE GEORGE I WALNUT AND FRUITWOOD SIDE CHAIRS 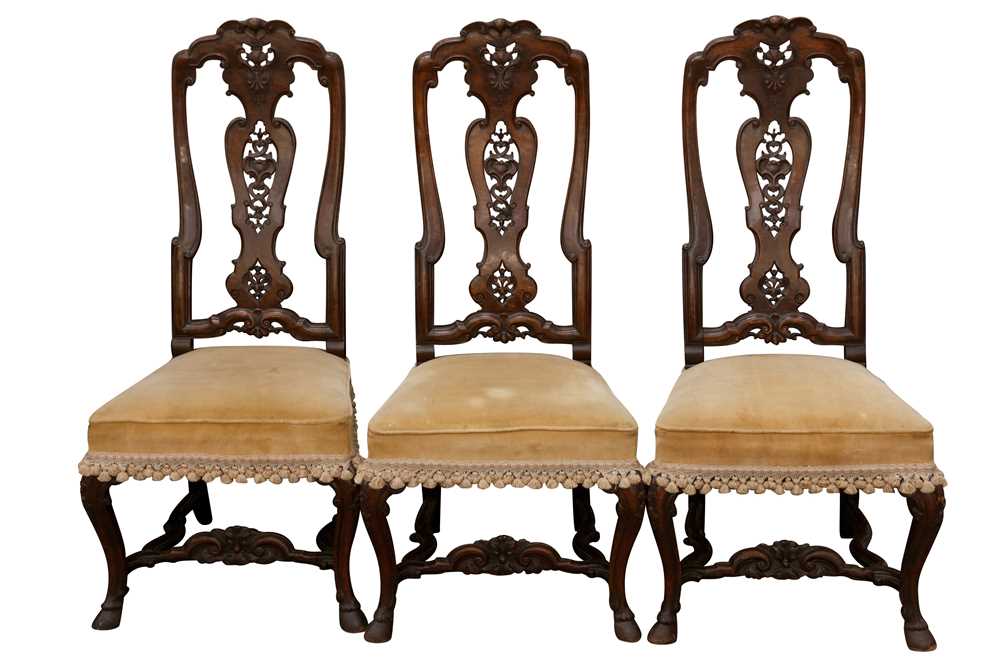 A SET OF THREE GEORGE I WALNUT AND FRUITWOOD SIDE CHAIRS

A SET OF THREE GEORGE I WALNUT AND FRUITWOOD SIDE CHAIRS, circa 1715, in the manner of Richard Roberts, each highback chair with pierced and carved vasiform seat backs of ‘bended back’ form, yellow velvet overstuffed seats, H shaped stretcher with carved cross bar, carved cabriole leg, carved shoulders and hoof feet. (3)

Richard Roberts succeeded his father in 1714 at the sign of 'The Royal Chair' in Marylebone Street. His father was the chief supplier to the Royal Households of James II, William and Mary, and Queen Anne. Richard continued to supply to the Royal Household until 1729 (G.Beard and C.Gilbert, Dictionary of English Furniture Makers 1660-1840, Leeds, 1986, pp.752-753).

These chairs are virtually identical to a set of ten chairs (originally eighteen) in the Private Dining Room at Hampton Court Palace [RCIN 1071], thought to have been supplied to George I by Richard Roberts (d. 1733). The examples at Hampton Court can be associated with the following account for ‘Richard Roberts, Joyner’ [to the Great Wardrobe] from the period Michaelmas 1717-Michaelmas 1718:

‘For 18 Chairs made of the best Walnuttree bended backs finely carved and pollisht and silk lace Seats for his maties [=Majesty’s] Dining Room ... £36.0.0.'

Although Roberts supplied a great number of chairs during the early years of George I’s reign, when this style was in vogue, this is the only account which incorporates three elements seen here: the ‘curved back, carving, and upholstered seats. The term ‘bended back’ probably refers to the Chinese-inspired form of narrow upright seat back or splat, which curves into the small of the back: such forms of far eastern invention were (confusingly) often referred to as ‘Indian’. Though the chairs have replacement rails, they betray no trace of alternative caned or matted seats.

The design of the back reflects chair patterns popularised by Daniel Marot, designer at the court of William III, though the use of the cabriole leg is forward looking. The petit point needlework seat covers were probably made in the mid-eighteenth century and may have been applied later when the chair rails were replaced. Three of the chairs are inscribed in pencil on the inside of the rear seat-rail 'E C Gunn' which presumably refers to a restorer or upholsterer.

A pair, also with drop-in seats, were sold from Myers Castle, Fife, Christie's, South Kensington, 24 November 1999, lot 93. A related set of six chairs with padded seats were with Pelham Gallery, June 1990. A further example is in the collection of the Victoria & Albert Museum [W.28-1909].