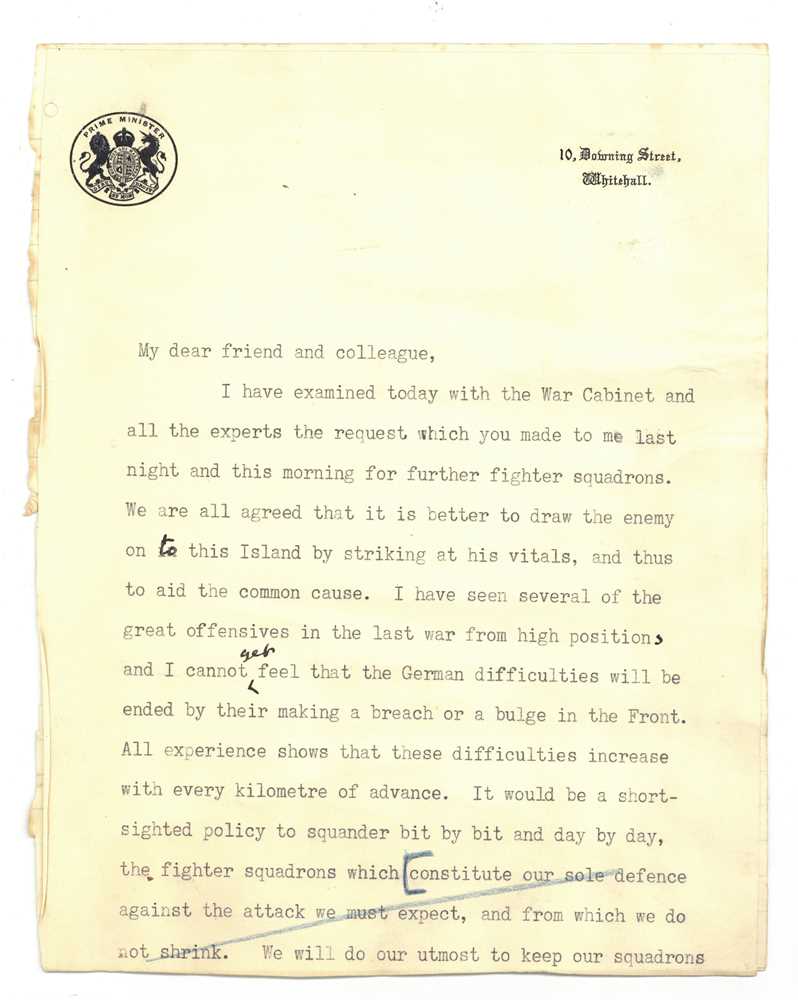 Draft of a wartime typed letter signed ('Winston Churchill'), addressed to Paul Reynaud, reading "I have examined today with the War Cabinet and all the experts the request which you made to me last night and this morning for further fighter squadrons. We are all agreed that it is better to draw the enemy on to this island by striking at his vitals, and thus to aid the common cause. I have seen several of the great offensives in the last war from high positions and I cannot feel that the German difficulties will be ended by their making a breach or a bulge in the Front. All experience shows that these difficulties increase with every kilometre of advance. It would be a short-sighted policy to squander but by bit and day by day, the fighter squadrons", two pages, with handwritten annotations and cancellations in Churchill's hand, pasted onto front and back of a blue-lined notepaper sheet, 4to, 10 Downing Street, [1940], with a third typed page inserted in the original draft to replace a passage crossed out in pencil, the addition reading in part "...The enemy can switch his bomber force on to these Islands as a few hours' notice; and if he should find them inadequately defended, he would be able to strike a blow at our war industry which might irretrievably damage the Allied cause. We have recently sent additional fighter squadrons to France over and above the numbers agreed before the war, and our fighter strength in this country has now been reduced to a minimum. So long as it is not further reduced we do not shrink - indeed we welcome as a diversion - the attack which we expect", one page, with pencil cancellations and additions, pasted onto blue-lined notepaper sheet featuring the following handwritten caption "Rough copy of a letter from Mr Churchill to Mr Reynaud refusing to meet the French demand for the use of all our fighter strength in the Battle of France (May 1940). Pages 1 and 2 are the letter as originally drafted; page 3 is an amended passage inserted in the original instead of the part crossed out in blue pencil", the lower right corner of the page has been neatly trimmed, the reverse features a clipped annotation in Churchill's hand ("A state of supreme emergency") captioned "Written by the Prime Minister at the time of the evacuation from Dunkirk"; light yellowing and occasional foxing (2)