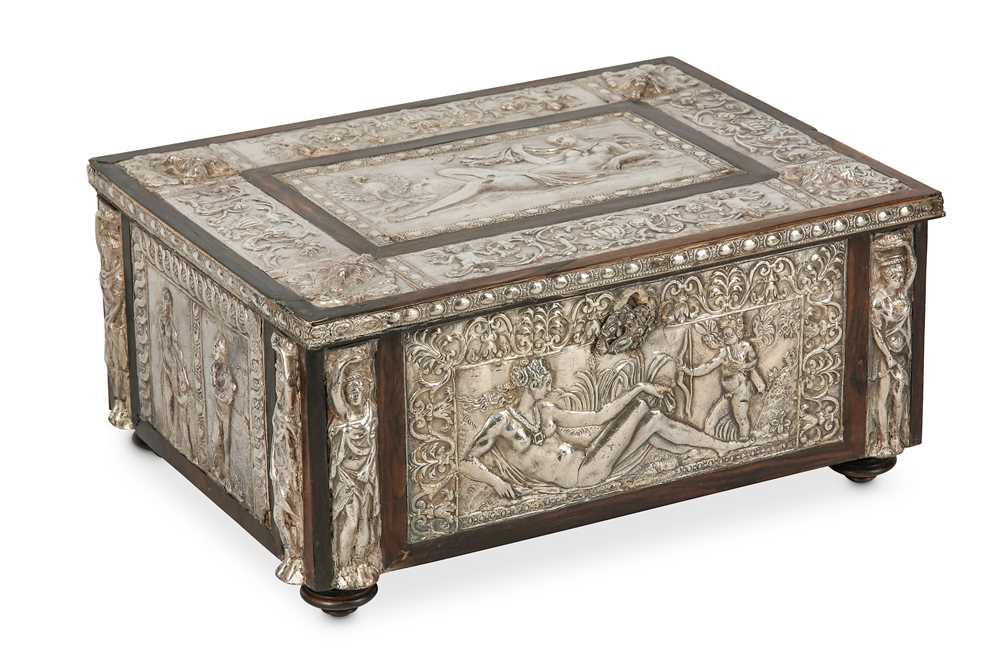 A COLLECTION OF 16TH CENTURY AND 19TH CENTURY REPOUSSE SILVER RELIEFS, POSSIBLY PRAGUE OR VIENNA, AFTER THE DESIGNS BY ANTONIO ABONDIO (1537-91) LATER MOUNTED ON A 19TH CENTURY CASKET  the 16th century silver reliefs depicting Juno and her peacock within an egg and dart border to the back of the casket, with a 19th century similar relief of the same subject to the top of the casket, a 16th century relief of Venus and Cupid to the front of the casket, to the right side a relief depicting Venus and Cupid and Chronos within a guilloche type border, the left side with 19th century reliefs of the same subject, the corner mounts of female figures holding baskets atop their heads dating from the 19th century, all mounted on a 19th century calamander casket with yellow silk lined interior, 37cm wide x 17cm high x 29cm deep Provenance: Purchased from the auction of the Collection of Baron de Sellieres at Chateau de Melot, France. For a direct comparable see the Wallace Collection, Inv. No. F504. This silver and ebony frame for a looking glass has been catalogued as Prague, Czech Republic or Vienna, Austria, circa 1590. It features near identical silver repousse reliefs of Venus and Cupid and Chronos, as well as male masks within strapwork and the distinctive guilloche border which flanks the reliefs of the present casket. It seems probably that during the 19th century, the original 16th century reliefs were copied in order mount on this casket, they may well have once adorned a looking glass frame like that in the Wallace Collection.