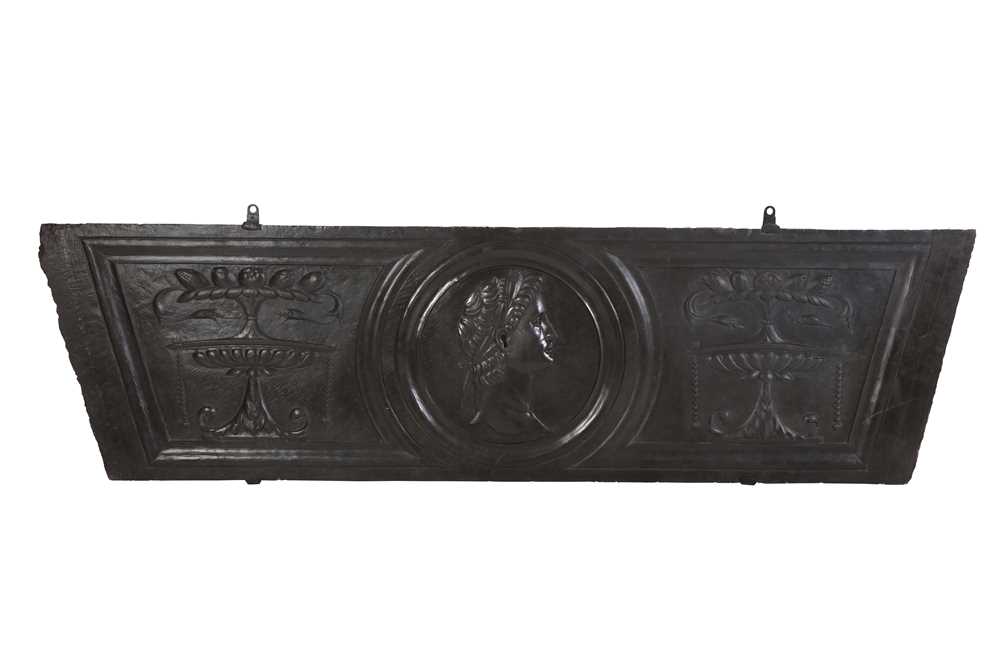 Click for high resolution
PROBABLY GENOESE, 16TH OR 17TH CENTURY: A SLATE LINTEL PANEL WITH A ROMAN EMPEROR IN PROFILE flanked by two vase-ornaments, 200cm wide  x 58cm high x 3cm deep With thanks to Dr Charles Avery for his assistance with cataloguing this lot. Portals in Genoa in the late 15th and early 16th centuries were frequently carved with over-door panels depicting St George, patron saint of the city, or the Annunciation, or the Holy Monogram, IHS, beginning with Giovanni Gaggini in a late gothic style and gradually evolving into the Renaissance (almost half a century later than what had happened in Florence). Two whole portals, magnificent in conception and in a fully Renaissance style carved in slate by Giovanni Gaggini, one of 1472 with an Annunciation, and the other of 1480 with the Resurrection, and three separate panels of St George and the Annunciation, are to be seen in the Victoria & Albert Museum, London. Others are still to be found in situ in Genoa, notably on the Doria Palace, and in museums world-wide.  Initially the portals tended to be overladen with rich – albeit Renaissance - detailing, but later on, in the hands of Gian Giacomo della Porta, some simplification took place, leading towards a more austere rendering of classical Roman architecture.  The present panel may well be an example of this stylistic shift. Literature:  John Pope-Hennessy, Catalogue of Italian Sculpture in the Victoria & Albert Museum, London, 1964, nos. 410-14, pls. 406-12. Hanno-Walter Kruft, Portali Genovesi del Rinascimento, Florence, 1971, plates 36-37; 21-22.