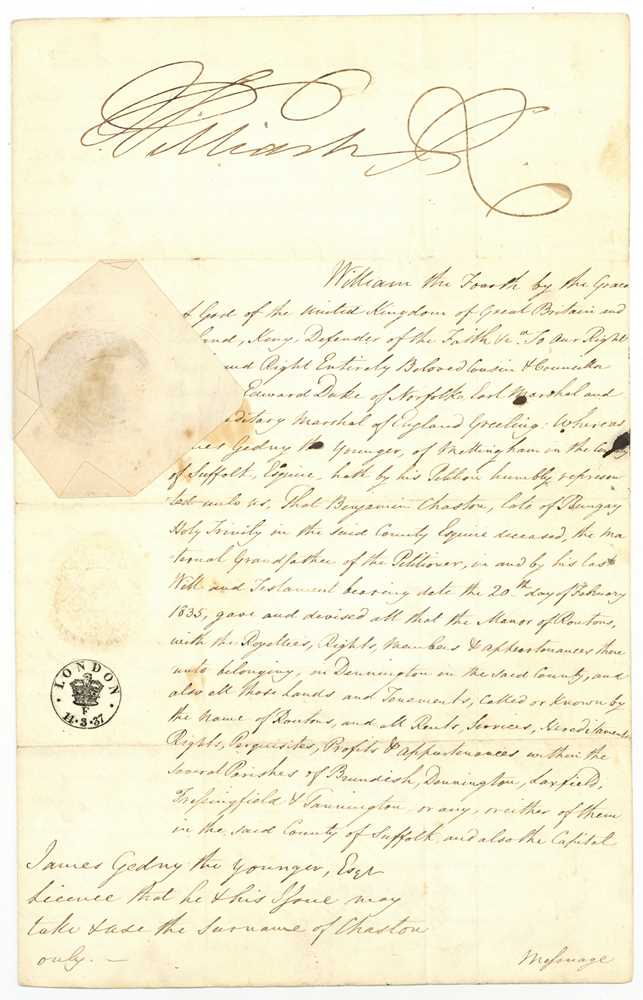 addressed to the Duke of Norfolk, Earl Marshal, and is a licence issued to James Gedny the younger allowing him and his issue to take the surname of Chaston and states, in part, "…James Gedny the younger, of Mettingham in the County of Suffolk, Esquire, hath by his Petition humbly represented unto us, That Benjamin Chaston, late of Bungay Holy Trinity in the said County, Esquire, deceased, the maternal Grandfather of the Petitioner, in and by his last Will and Testament bearing date the 20th day of February 1835, gave and devised all that the Manor of Routons, with the Royalties, Rights, Members & appurtenances there unto belonging, in Dennington in the said County, and also all those lands and tenements…..within the several parishes of Brundish, Dennington, Laxfield, Fressingfield & Tannington…..containing in the whole 250 acres or thereabouts and which the Testator lately purchased of his son in law Mr. James Gedny…..to hold the same & every part thereof unto and to the use of the Petitioner by the name and description of his (the Testator’s) Grandson James Gedny the younger (in the Will written Gedney) his heirs & assigns for ever. That in the said Will, there is contained a clause, providing and declaring it to be the mind & will of the Testator that the Petitioner shall within the space of 12 calendar months…..take upon himself & use in all Deeds and writings whereto or wherein he shall be a Party and upon all occasions the surname of Chaston only; and shall & do within the aforesaid space apply & endeavour to obtain a proper Licence from the crown to enable and authorize him so to do, and in default thereof, the Gift and devises so made to the Petitioner to cease determine and be utterly void….", further requiring the Earl Marshal to record the concession and declaration in the Heraldry office and in the College of Arms, signed ('William R') at the head, countersigned at the conclusion by Lord John Russell (1792-1878) British Prime Minister (1846-52, 1865-66) and at the time of this document Secretary of State for the Home Department (1835-39), three pages, with blind embossed paper seal affixed,a few light stains and minor age wear, folio, Court at St. James’s, 9 March 1837.