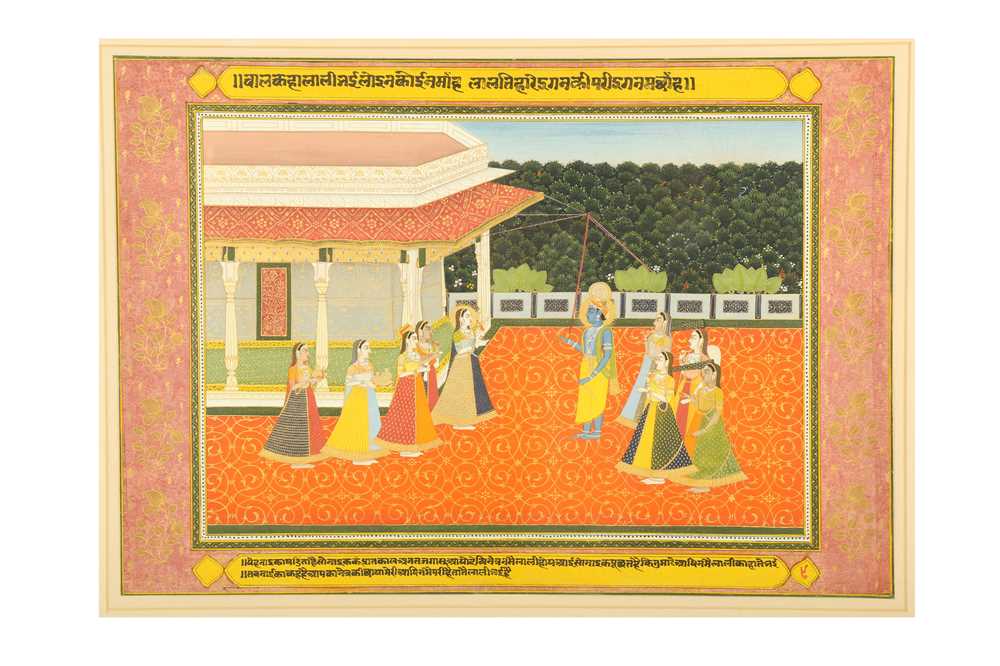 AN ILLUSTRATION FROM A KRISHNA LILA SERIES: THE FEMALE HEROINE (NAYIKA) MEETING HER BELOVED (NAYAKA) FOR THE FIRST TIME
PROPERTY FROM A PRIVATE GERMAN COLLECTION
Jaipur, Rajasthan, North-Western India, ca. 1820 - 1840

Opaque pigments heightened with gold on paper, the horizontal composition depicting a scene from a Krishna Lila series, marked as number 5 in the cusped yellow cartouche on the lower-right corner, the yellow epigraphic cartouche at the top filled with poetic love couplets of black ink Braj Bhasha dialect, the one at the bottom filled with an explanation of the above couplets in Rajasthani dialect, mounted on cardboard, glazed and framed, 27.5cm x 39.5cm excluding the frame.

In this illustration, taken from an early 19th-century Rajasthani Krishna Lila series, the nayika is standing outside a marble palatial pavilion on a spacious terrace, the natural surroundings appearing lush and in full blossom. She is meeting for the first time her nayaka. In several Indian classical texts, such as Rasikapriya and Krishna Lila, the nayaka is often interpreted by the blue-skinned Hindu god Krishna, who is usually characterised by a typical headdress with a peacock's feather. His companion, the nayika, would then be interpreted by Radha, whose character is often imbued with all the qualities and moods of the Ashta Nayikas from the Natya Shastra. However, in this specific instance, the female heroine is simply referred to as nayika in the text, rather than Radha.

The aim of the illustration is to offer a visual reference to the love couplets (at the top) and to their explanation (at the bottom). Both the nayika and the nayaka are the main focal point of the painting, their relevance highlighted by the radiating haloes behind their heads. The nayika and the female attendants are all wearing the typical colourful Rajasthani lehenga choli attire (short top and wide long skirt), and they are covering their heads with diaphanous shawls. The attendants behind the heroine are all holding vessels and tools traditionally associated with the Indian welcoming etiquette: lotas, handkerchieves, a fan, and a water jug. These are all objects offered by the host to their guests to refresh themselves upon entering their residence for the first time, a practice still in place today.