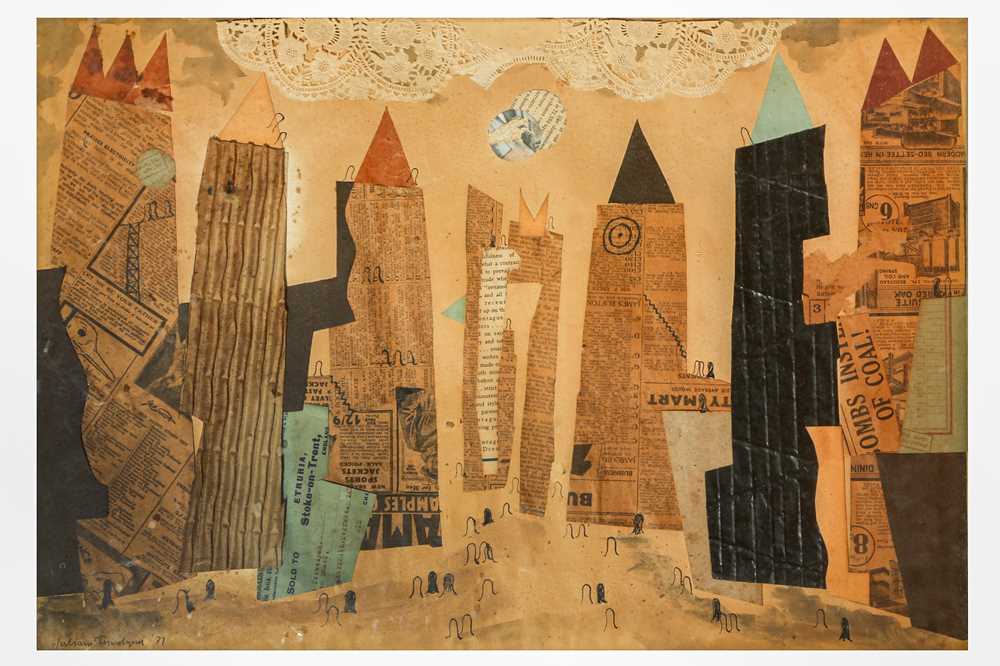 In the late 1930s Trevelyan started using collage as a preferred medium when travelling the country and recording the cities and towns he visited. Influenced by the Surrealists and most notably by Max Ernst, who he met and worked alongside in Paris, Trevelyan would use scraps of newspaper, serviettes, labels from his own artworks and ink to build his compositions. By 1937 he was involved in the Mass Observation project which was founded by, among others, the young anthropologist Tom Harrison. It consisted of a group of artists, poets, writers and film makers who aimed to capture and record modern society. City is a beautiful example of the Trevelyan’s use of collage to create a lively composition, which is both expressive through its visual appeal and through the materials used to create it.

I cruised around and settled on the outskirts of town near to some cotton mills and reservoirs. At the time I was making collages; I carried a large suitcase full of newspapers, copies of Picture Post, seed catalogues, old bills and other scraps, together with a pair of scissors, a pot of gum, and a bottle of Indian ink. I was applying the collage techniques I had learnt from the Surrealists to the thing seen, and now tore up pictures of the Coronation crowds to make the cobblestones of Bolton. It was awkward, sometimes, in a wind, when my little pieces would fly about, and I was shy of being watched at it; but it was a legitimate way, I think, of inviting the god of Chance to lend a hand in painting my picture.